First published in 1997, with a second edition in 2002, Tug Use in Port by Captain Henk Hensen is known as the “tug bible.”

A third edition of this practical guide to port towage and escort operations has now been published, taking in developments in tug design and operation. Some significant changes have been made in this third edition, including:

•  Stability has been further explained, along with recommendations for tug masters with respect to stability.

•  Environmental limits for tug operations are discussed, and attention is paid to operating in fog conditions.

•  The impact of crew reduction on board tugs, another important item, is addressed.

•  Information on towing winches, towing hooks, towlines, towline friction and SWLs of ship’s deck equipment has all been updated, and the need to use proper heaving lines addressed.

•  New technical developments, such as virtual and augmented reality, are discussed – along with use of simulators for human factor studies.

•  The escort chapter has been thoroughly reviewed, including the reasons for escorting and an update on various escort regulations.

•  The topic of autonomous ships is discussed, including the possible effects on tugs and tug operations.

•  The important issues of risk assessment and safety management systems are newly included in this edition, along with commentary on the effects of the U.S. Subchapter M.

“This book, which is recommended by IMO, is specifically written with the needs of maritime professionals involved in the day-to-day practice and training of ship handling with tugs in mind, particularly pilots, tug masters and training instructors,” says Hensen. “It should also be of value to towing companies, shipmasters and mates of seagoing vessels and all other people or organizations involved, one way or another, with tugs and ship handling.

“It is my earnest hope that this book will contribute to an improved knowledge of tugs and lead to increasing safety in tug and ship handling operations in ports, port approaches and offshore terminals around the world.”

Julian Parker, former Secretary of The Nautical Institute, said: “This third edition of Tug Use in Port is one of the best guides I have read. To have embraced an international, highly technical and operationally critical industry with such clarity is a great achievement.”

The large-format hardback book is illustrated with a wealth of detailed diagrams, graphics and photographs. The book can be ordered at a price of €45 at The ABR Company Limited www.tugandosv.com. 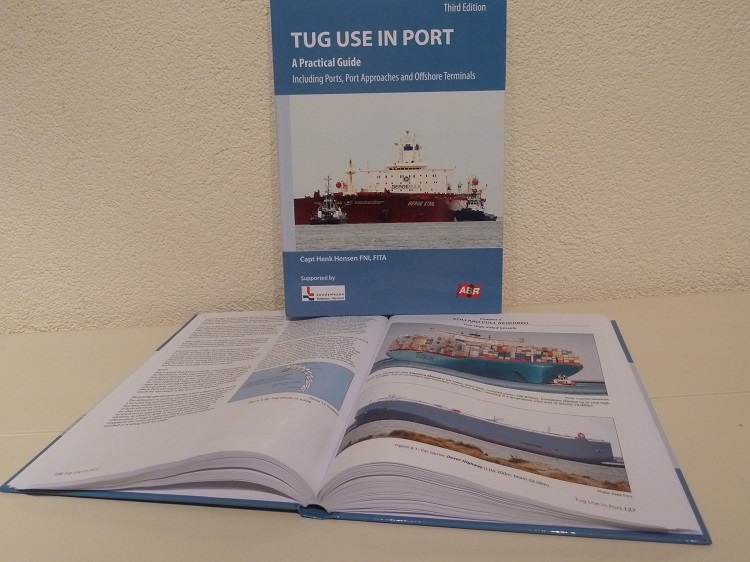