U.S. Court Rules That Titanic's Marconi Set Can be Salvaged

In the ongoing battles over the RMS Titanic and its wreck site, the United States District Court for the Eastern District of Virginia has issued an order providing RMS Titanic, Inc. (RMST) the opportunity to conduct an expedition to recover the wireless Marconi telegraph from inside the ship.

The proposed expedition is one of the more controversial to the wreck, as it not only involves removing artifacts but in this case going inside the wreck to gain access to the “wireless room,” where the equipment is located. While RMS Titanic Inc. has the admiralty rights for salvage at the site, and it has retrieved about 5,500 items since 1987, items except for the hull fragments have been remove from what is called the debris field outside the hull.

In July 2000, it had been ruled that RMST could not cut into the ship, but the new ruling reverses that earlier decision. The court is permitting for the first time cutting into the ship, specifically to enter the deckhouse containing the wireless room along with the sleeping quarters for the Marconi operators. As part of the permission for the expedition, the court also ruled that a report with a list of the artifacts removed and the plan for their conservation must be presented to the court along with any recordings taken during the recovery expedition.

Arguing that recent surveys revealed that the vessel deterioration due to currents, iron-eating bacteria, and saltwater corrosion is accelerating, RMST justified its plans to the court saying that the room holding the equipment might soon be destroyed “potentially burying forever the remains of the world’s most famous radio.” 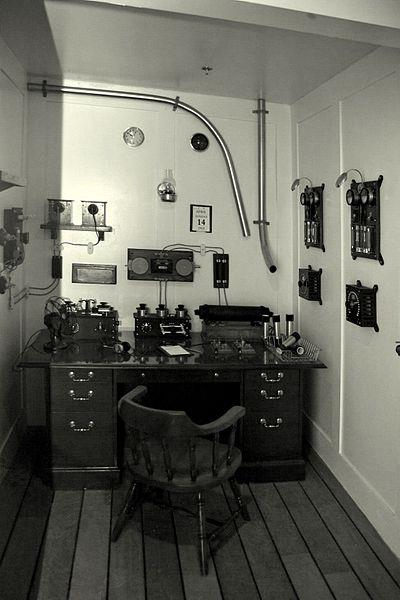 Indeed, the Titanic’s Marconi equipment and its operators have become legends as the ship’s history was retold in movies and television specials. In 1912, the Marconi wireless was a relatively new technology for shipping, with the Marconi Corporation holding the patents for the technology and employing the operators who worked aboard the ships.

The Titanic's senior wireless operator, John “Jack” Phillips and Harold Bride have been portrayed staying diligently at their post tapping out the Morse Code distress calls SOS and CQD after being given the ship’s position by Captain E.J. Smith. The operators reportedly were even forced to improvise repairs to keep the ship’s only communication lifeline going as long as possible. In addition to reaching the Carpathia, which would become her rescue ship, Titanic’s wireless was picked up by more distant liners and even heard in New York bring the first reports of the disaster.

Harold Bride would be washed off the deck of the sinking Titanic and survived by standing atop an overturned lifeboat. Among the 705 survivors of the tragedy, he told the tale of how Phillips and he had stayed at the wireless until the power failed. Phillips did not survive.

"We remain dedicated to sharing the legacy of the ship and her passengers with the public,” said Bretton Hunchak, President of RMS Titanic, Inc. in a press release announcing the court’s decision. “Without the recovery, conservation, and display of these artifacts, the ability to experience first-hand additional significant historic artifacts would be limited to only an exclusive group, those who have the privilege and economic means to travel to the wreck site. While many items that remain in and around the Titanic wreckage have the ability to enlighten generations on the lives of its passengers, only one item holds the story of all of the survivors," he said speaking of the Marconi equipment.

While the company has undertaken extensive preservation efforts for the artifacts it has removed from the wreck site, critics continue to contest efforts to remove and display and potentially sell artifacts from the Titanic. They argue that it is tomb-robbing and not respectful to the people who died in the tragedy.

A long-awaited treaty on the protection of the RMS Titanic entered into force in 2020, giving the governments of the UK and the United States the power to administer licensing for entry into the wreck or the removal of artifacts.