The busy Suez Canal shipping lane in Egypt is experiencing a snarl up of vessel traffic after a large container ship ran aground on Tuesday.

The vessel, Evergreen's Ever Given, ran aground and became lodged sideways across the waterway, blocking the path of dozens of other vessels. Reports indicate that as many as 100 ships were trapped in lines in both directions.

Authorities in Egypt deployed tug boats to help shift the massive ship and free up traffic in one of the world’s busiest maritime trade routes. There are fears that it could take days to move the ship and clear the traffic backlog.

“A container ship en route from the Red Sea to the Mediterranean ran aground at KM 151 in the Suez Canal at about 07.40 hours local time this morning (23 March). The vessel suffered a black out while transiting in a northerly direction,” said shipping company GAC in a statement. 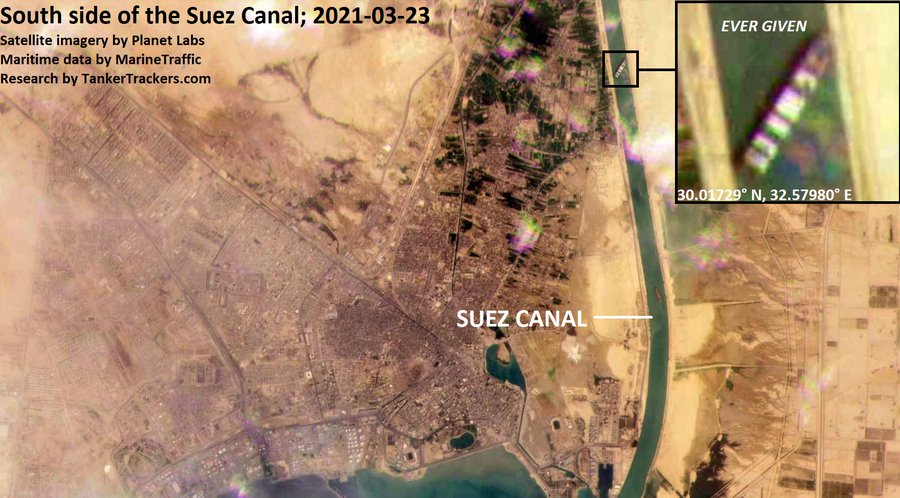 GAC added that the giant ship was fifth in the northbound convoy, and although none of the vessels before it were affected, the 15 behind it were detained at anchorages waiting for the Canal to be cleared. The southbound convoy was also blocked.

Satellite AIS data and photos from the scene showed that the ship’s bow was touching the canal's eastern bank, while its stern appears lodged against the western bank.

Reuters reported that the ship “was suspected of being hit by a sudden strong wind, causing the hull to deviate from the waterway and accidentally hit the bottom and run aground." A spokesman for the Suez Canal Authority told the New York Times that a sudden sandstorm with restricted visibility and high winds caused an “inability to direct the ship."

By the afternoon of March 24, about 34 boxships with 380,000 TEU of total capacity were immobilized in the canal or en route to the canal zone, according to supply chain visibility company project44. Samir Madani, founder of TankerTrackers.com, told CNN that crude tankers carrying a combined total of 10 million barrels of oil are also parked in the queue.

The 2018-built Ever Given is 400 m (1,312 feet) long and 59 m (193 feet) wide, and she has a nominal capacity of 20,000 TEU. She was bound for the port of Rotterdam from China and was passing northwards through the canal on her way to the Mediterranean, and was set to arrive in the Netherlands on March 31.

The busy Suez Canal connects the Mediterranean to the Red Sea, and is the quickest maritime link between Asia and Europe. The waterway, which is around 193 kilometers long, was built by the Suez Canal Company between 1859 and 1869. About 12 percent of the world trade volume passes through it, making it one of the world's busiest waterways.

In 2015, Egypt's government opened a major expansion of the canal that deepened the main waterway and provided ships with a 35 kilometer channel parallel to it. Nearly 19,000 ships with a total tonnage of 1.17 billion tonnes passed through the canal last year, according to the Suez Canal Authority.

The last time a similar incident occurred was in 2017 when a Japanese container vessel blocked the canal after it ran aground due to mechanical issues.