Dynamar has released its latest South America Container Trades report, highlighting a return to growth after three years of decline for the region's international trade.

Written by Darron Wadey, the report notes the growth after economic contractions between 2014 and 2016, with subsequent recovery in 2017. Full container carryings between South America and the rest of the world reached just over 10 million TEU in 2017. This was up eight percent on 2016. Dynamar expects South America containerized trade to reach 14 million TEU in 2021.

The region is home to over 390 million people, has a trade value of $897 billion and a GDP estimated at $3,739 billion. Brazil is the largest country by far with a population of over 209 million and generating some 42 percent of trade, 55 percent of GDP and 43 percent of South America’s 22 million TEU throughput. On the west coast, Colombia (with also a northern coast line) has the largest economy, with 49 million residents generating 8.4 percent of total GDP. However, it is Chile that has the greater container throughput at 20 percent.

South America’s exports are largely agricultural based: meat and chicken from the east coast and fruit from the west coast. Imports include consumer goods, equipment and machinery of various types and petroleum products. South America accounts for 16 percent of worldwide perishable exports.

Between 2013 and 2017, South America’s merchandise trade, by value, shrank some $222 billion, or 20 percent, to $897 billion. The main damage was done in 2015 when the value of trade dropped by 19 percent. Compound annual growth rate over the whole period reviewed was -5 percent.

Port Callao, Peru, had the highest container throughput on the west coast, Santos, Brazil on the east coast. The report covers Chile, Peru, Ecuador, Colombia, Brazil, Uruguay and Argentina, as well as two landlocked countries: Bolivia and Paraguay. The west coast stretches 12,500 kilometers. Over half of this belongs to Chile, a nation that, at its widest, measures less than 250 kilometers.

Port container handlings of more than 50 South America ports studied reached 22 million TEU in 2017, reflecting a growth of 6.4 percent on the year before.

A number of private terminal operators are active throughout South America, six are local to South America. Global operator APM Terminals and Chile-based SAAM both have interests in six facilities each. Other operators with interests in the region include DP World, ICTSI, TIL (MSC) and regional company Ultramar.

Incoherent port and terminal development has raised fresh concerns on the East Coast. Issues under the spotlight are the removal of concessions in Brazil, conflicting policy announcements and the likely consolidation of separate Buenos Aires concessions into one in 2020. Hence, at least three terminal operators have been or are looking at reducing their presence, perhaps to the point of complete withdrawal in a couple of cases.

The report identifies 47 container liner services that offer direct connections with South America with a fleet of some 341 vessels at an average of 6,500 TEU per ship. In terms of average capacity deployed, the Far East trade lane leads the way, followed by Europe and North America, respectively. These liner services call at 38 South American ports. 21 are located on the east coast and 17 on the west coast.

The South America trades have experienced the loss of some familiar names: CSAV to Hapag-Lloyd in 2014 and CCNI to Hamburg Süd in 2015. Hamburg Süd and affiliate Aliança survive, but are part of Maersk group.

The 23 vessel liner carriers active on the trades serving South America deploy 341 ships with a total carrying capacity of 2.2 million TEU. They connect South America with 77 ports in the Far East, Europe, North and Central America and Africa. Among the ships are 51 ultra-large container ships ranging from 10,000 to 13,000 TEU. 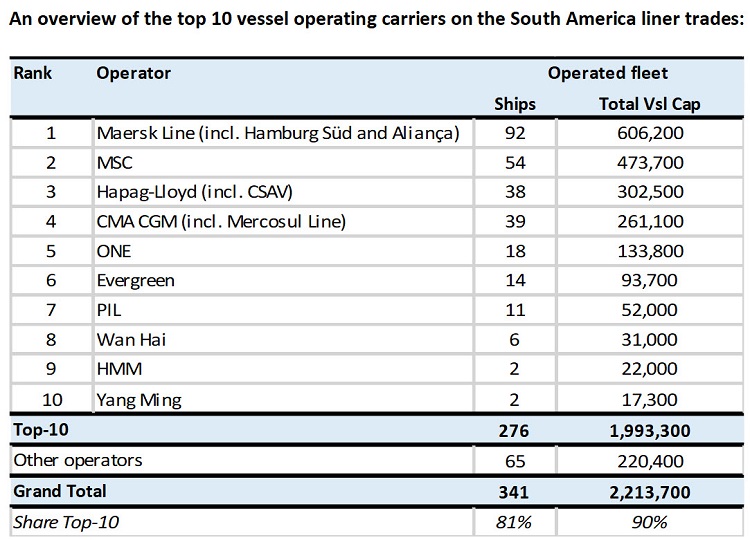 All four east coast countries are members of the regional Mercosur/ Mercosul common market. This is a free-trading zone established by the 1991 Treaty of Asunción among Brazil, Argentina, Uruguay and Paraguay. Bolivia will become the next full member. Elsewhere Chile, Colombia, Ecuador, Peru, Guyana and Suriname are associate members. Venezuela is currently suspended from the organization.