Singapore is moving forward with a novel way of making deliveries to vessels at anchor in its harbor. After a series of preliminary tests using drones to carry documents, supplies and parts, as well as for remote inspections, the Maritime and Port Authority of Singapore launched a designated area for the operation of the drones. The MPA believes that the location will become a test and proving ground to advance the use of drone technologies for marine applications.

Called the Maritime Drone Estate, the site is located near the Marina South Pier in Singapore. It is close to the anchorages and includes a designated landing and takeoff area for the drones, as well as places for the operators to set up to manage the flights.

“Technology has played a pivotal role in helping the maritime sector remain resilient during the COVID-19 pandemic,” said Chee Hong Tat, Senior Minister of State for Foreign Affairs and Transport. “The launch of the Maritime Drone Estate marks an important milestone in advancing Singapore’s journey towards the use of emerging technologies in the maritime sector. As we embark on this exciting future, we look forward to supporting our industry partners and growing more start-ups to build a thriving maritime innovation ecosystem.”

During a launch event for the dedicated drone operations park, 11 companies showcased their cutting-edge drone technologies, engineering systems, additive manufacturing, and communication services, that can provide innovative drone solutions for the maritime sector. As part of the kickoff celebration, Minister Chee loaded a 3D-printed part into a drone carriage and witnessed the delivery of the package to a vessel in the nearby anchorage. 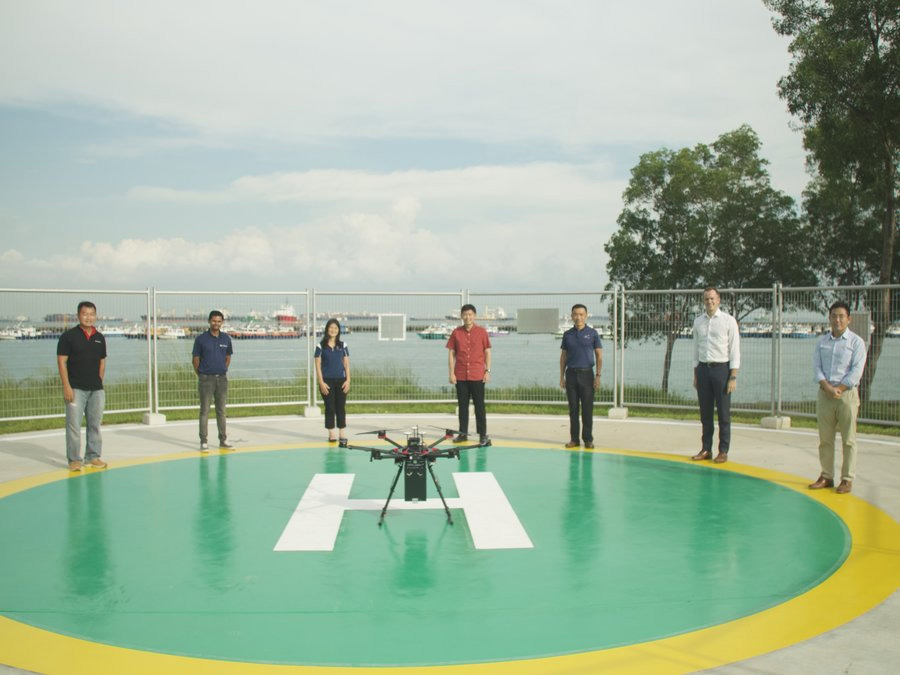 Speaking at the event the companies highlighted the potential to speed critical deliveries to ships. They said that by boat it often takes an hour to make a journey out to a vessel in the anchorage versus drone flights that can be completed in less than 15 minutes. In addition to the ability to reduce personal contact, which has been important during the pandemic, they also highlighted the safety aspects of not having people moving around the harbor in small boats and required to climb the ladders to board a ship.

The MPA reports that nine companies have conducted trials at the drone estate. This includes tests of shore-to-ship transports and trials using drones for surveillance and beyond-visual-line-of-sight drones for surveillance and remote ship inspection. Among the other types of tests being conducted are 5G network and technology trials to enable safe and robust maritime drone operations. Other tests are also exploring the use of an unmanned aircraft traffic management system to enable large-scale drone operations throughout the port.

A Singapore-based start-up company called F-drones recently raised seed capital to continue the development of its system designed to carry over 200-pound payloads a distance of over 60 miles. Eastern Pacific Shipping, which has been involved with the first test flights, lead this round of investment along with participation from shipowner/manager Schulte Group. Among the demonstration flights operated by F-drones was the delivery of parts and gifts to the ships as well as carrying water and fuel samples ashore for testing.

The European Maritime Safety Agency has been conducting a range of surveillance and monitoring operations with port authorities in parts of Europe testing ship emissions as well as supporting law enforcement operations.