While the shipping industry is not historically known for its successes at diversity, the industry continues to make progress with several new initiatives planned to further inclusion in shipping. Marking the occasion of the 2022 International Women’s Day, many shipping companies took the opportunity to highlight advancements made by women in all aspects of shipping while the International Maritime Organization, International Chamber of Shipping, Women's International Shipping & Trading Association (WISTA International), and others launched initiatives to support the next generation of female seafarers.

In an industry where less than two percent of seafarers are women, companies are proud to highlight their progress while also recognizing that there is still much to be done. However, it is not uncommon to find women in positions of command and authority on the bridge of vessels ranging from cruise ships to tankers.

Celebrity Cruises, for example, was one of the first cruise lines to name a woman as a captain of a large cruise ship in 2015. Kate McCue became the symbol of the cruise line’s diversity and inclusion efforts frequently highlighted as she rose through the ranks assuming higher profile command in the fleet. Captain Kate McCue remains the first, and still only, American female captain in command of a large cruise ship, and in a matter of weeks, she will become the first female Captain to start up a mega cruise ship, the 140,600 gross ton Celebrity Beyond, as well as the first female Captain to "take out" a ship from Chantiers de l'Atlantique in its 160-year shipbuilding history.

Celebrity Cruises highlights that today that one third of its bridge officers are now female. The company has also dedicated efforts to advance women from maritime schools in developing countries, such as Ghana in Africa, and was proud to say that it made the first advancements below decks with women beginning roles in the engineering department of its cruise ships.

"Looking back at how far we've come in six years is quite extraordinary,” said Celebrity Cruises president and CEO Lisa Lutoff-Perlo, who is also a female pioneer in her career. "Now, we have incredible women from 19 countries and at all levels of maritime leadership to encourage girls to consider this industry... We are so proud to pioneer this path.” 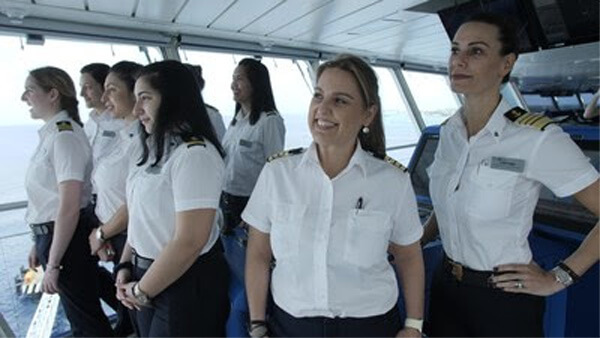 Female advancement is not limited to the glamorous cruise ships either. Sweden’s Furetank noted that it “has a fair share of female crew members,” working aboard its tankers. The company said it has twelve officers, including four senior officers, as well as three ratings, that are women. ”As in all industries, a diversified workplace in terms of gender and cultural background is a good thing,” said Furetank’s CEO Lars Höglund. “It helps us all grow as people and colleagues.”

The shipping union Nautilus International’s general secretary Mark Dickinson however notes that there is still much work to be done in the industry. “We need to ensure those who do go to sea feel welcome in the profession,” he said noting the lack of provisions for women and the sometimes hostile atmosphere aboard ships. “The International Chamber of Shipping estimates a global shortage of 89,510 seafarers by 2026, but there is a real opportunity to address this by encouraging more women to work at sea.”

To achieve the goal of expanding diversity and inclusion, the ICS announced the launch of its inaugural Maritime Diversity and Inclusion Charter. The charter and the online tools were created to encourage shipping companies to improve and annually review their diversity and inclusion practices and create opportunities for all seafarers. Shipping companies chose and set their actions and pledges and then monitor their progress reporting metrics earning recognition with different achievement levels.

“It has never been more important to provide a safe company culture in which equality, fairness, and respect are incorporated into policies and behaviors,” said Natalie Shaw MBE, ICS’s Director of Employment. “This Charter aims to recognize the efforts of many while providing guidance for those who still have work to do .... Shipping is one of the most culturally diverse industries on earth. It’s high time that we make concerted efforts to create space to attract people who previously may have not considered the opportunities available in such an exciting sector.

The IMO in collaboration with WISTA International and Maritime SheEO launched the Maritime SheEO Leadership Accelerator Program 2022. During a webinar to mark the launch of the program they highlighted that The Maritime SheEO Leadership Accelerator Program was developed with the assistance of key industry experts working with IMO and WISTA.  According to the sponsors, it will enable women to become part of an active and trustworthy network of female executives who support and inspire each other along their leadership journey.  The program is designed to provide management knowledge and skills to help women in the maritime industry move into leadership roles.

Kitack Lim, Secretary-General of the International Maritime Organization addressed the webinar acknowledging that diversity in leadership is good for business and that woman leaders are vital for the future of maritime. He said he was confident that the maritime industry is working to transition to a more sustainable future.