An intense early season storm played havoc on shipping around the UK over the weekend, keeping Her Majesty’s Coastguard and other rescue authorities busy responding to a variety of weather-related incidents. In the north of Scotland, the weather was forecast up to Force 10 with winds reaching 60 mph.

Among the incidents, HM Coastguard responded to a call for assistance from a cargo vessel north west of the Shetland Isles that reported engine problems during the storm. The emergency towing vessel, Ievoli Black, was dispatched. They stood by the cargo ship which was able to complete repairs and proceed on its voyage. The Coastguard, however, reports that they are continuing to monitor the vessel’s progress. 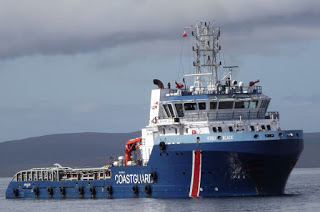 HM Coastguard was also responding to reports of containers lost overboard from a 5,900 dwt Dutch cargo ship the Francisca in the area of the Pentland Firth in northern Scotland. Initial reports said that 10 containers had been lost during the storm, but the number was later raised to 33 empty 40-foot containers. Two of the containers have been reported ashore in South Hoy in the Orkney Islands while the emerging towing vessel was acting as a guard vessel in the Pentland Firth. The Northern Lighthouse Board and a Coastguard aircraft were also assisting in the search for the lost containers.

The Oban Royal Navy lifeboat was also launched in gale force winds on October 31 to assist a 22-foot fishing vessel in Loch Etive. The boat with 4 persons on board, had broken down, but managed to secure to a fish farm mooring while they awaited assistance. The lifeboat launched at 3:45 pm with the volunteer battling the heavy seas and winds gusting 60 mph. It took the lifeboat 30 minutes to reach the fishing boat and while they were able to get the vessel free of the fish farm, the weather required the crew to take the people off the fishing boat to the lifeboat. The Coastguard later assisted with transfer the fishing crew to shore.

A French sailor also radioed for assistance six miles South West of the Isles of Scilly on November 1 after his vessel was disabled by a high wave. A Coastguard rescue helicopter was dispatched and an RNLI lifeboat was able to locate the vessel. The 34-foot yacht was towed to harbor by the lifeboat.

Also on Sunday, November 1, the Coastguard was also called on to assist two crewmembers of a cargo ship who had been injured in the storm. A helicopter crew was sent from Inverness, Scotland to provide medical assistance. The two crew were airlifted to the helicopter and take ashore to a hospital for treatment.

The severe weather also caused ferries in the region to suspend service. 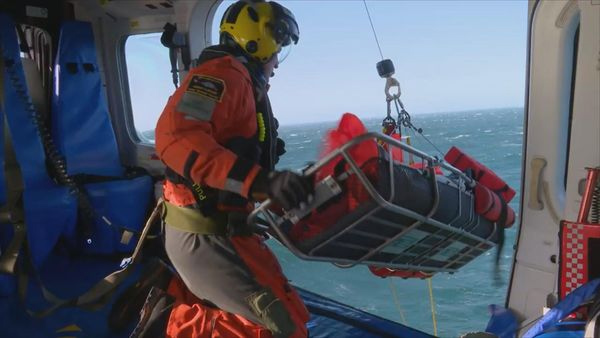