Scarlet Lady, the first of four ships ordered by Virgin Voyages, was floated out on February 8 at Fincantieri's shipyard in Genoa Sestri Ponente, Italy.

Interior fittings will now begin, leading the ship to its delivery which is scheduled for the beginning of 2020.

Scarlet Lady will be about 110,000 gross tons, be 278 meters long and 38 meters wide. Virgin Voyages' second ship, currently under construction in the same yard, will be delivered in 2021, while the third and the fourth ships will set sail respectively in 2022 and 2023. They will all feature over 1,400 guest cabins designed to host more than 2,770 passengers, accompanied by 1,160 crew members.

Late last year, Virgin Group announced plans to build a new cruise terminal at PortMiami for Virgin Voyages. With the new terminal and a long-term commitment to PortMiami, Virgin Voyages also announced that Scarlet Lady will continue to sail to the Caribbean from Miami throughout 2021. The company’s second ship will sail from Miami during the fall/winter cruise season of 2021/22.

The Virgin Voyages Terminal will be located on the northwest side of the port and is expected to be complete by November 2021. The new 100,000 square foot terminal will be a palm grove inspired design concept developed by the Miami-based designers from Arquitectonica. The palm grove design is inspired by Miami Beach’s iconic palm trees and the island’s historical origins as an area intended for harvesting coconuts. The terminal’s rooftop is designed to resemble a palm tree grove with rooftop pockets that allow natural light to flow into the building by day, and uplighting by night that will light up the company’s Virgin Voyages red logo.

“Miami is an incredible city and one of my favorite places to work and play,” said Branson. “From our headquarters for Virgin Hotels, Virgin Voyages and now Virgin Trains USA, South Florida has quickly become another home for Virgin brands in the leisure travel sector.” 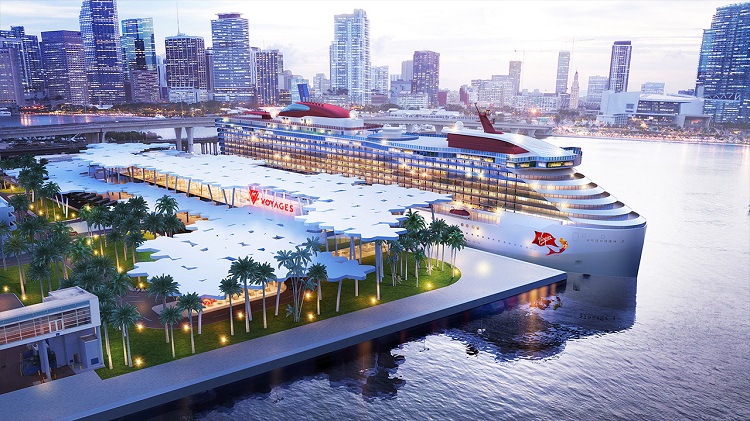