Scandlines plans to retrofit the second one of its ferries with a rotor sail. The decision to proceed with the installation was based on a year of results after deploying the first rotor sail on the 22,300 gross ton ferry Copenhagen.

The Danish ferry company explains that when they decided to proceed with the first installation it was based on technical data from the manufacturer Norsepower along with the experience from a few other shipping companies and its own studies and calculations. The Norsepower rotor sail was installed in May 2020 as a further step to improve the operations of the ferry that already employs a hybrid propulsion system. The ferry is equipped with a 1.6 MWh battery that when deployed with the diesel engines ensures the motors are always operating at optimum load levels.

“We had expected that the rotor sail on the Copenhagen would lead to a CO2 savings of four to five percent,” says Michael Guldmann Petersen, COO of Scandlines. “This expectation was fulfilled so that we are now ready for the next step and have therefore also prepared the sister ferry Berlin for a sail.”

The Berlin and the Copenhagen both operate the route between Rostock, Germany and Gedser, Denmark. According to Scandline, the route fulfills the condition for the best possible effect of the sail on the drive. “Our route across the Baltic Sea runs in a north-south direction, and the wind mostly comes from the west or east. So our rotor sail has optimal conditions,” says Petersen. 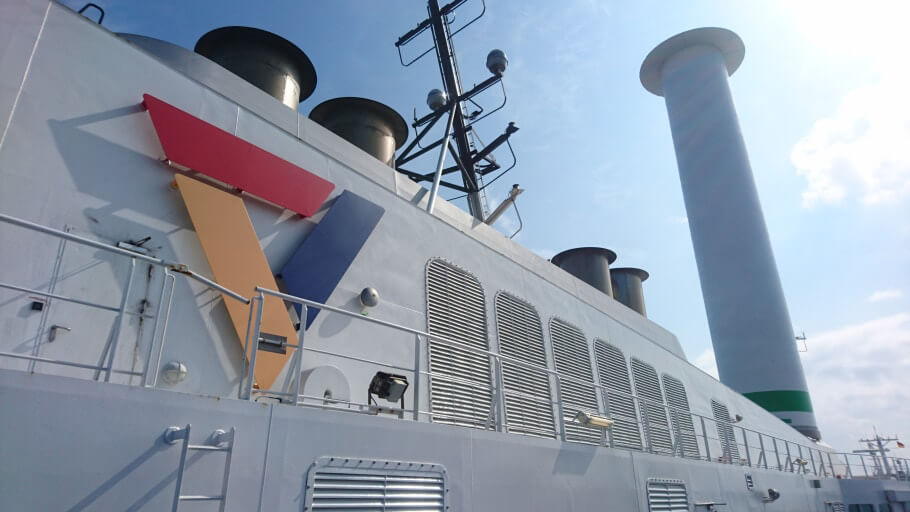 The installation of the rotor sail was completed in a two-step process for the Copenhagen and the company plans to use a similar process to minimize the time out of service for the Berlin. During the first phase of the installation, a steel foundation is fitted to the deck and then the wiring and other installation can proceed while the vessel is in service. The actual rotor, which stands 98 feet and had a 16.5-foot diameter, was retrofitted in just hours during a scheduled overnight stop in Helsinki.

“Overall, there was great interest in the rotor sail - and at first there was also great astonishment among the passengers about the ‘chimney’,” says Petersen. “Most of the crew are now masters at giving technical explanations that are easy to understand.”

After nearly a year of data from the operations aboard the Copenhagen, Scandlines decided to proceed with the second ferry. Building the steel foundation on which the rotor sail will stand, took place when the Berlin had her scheduled shipyard stop at Remontowa in Poland at the end of May. The installation of the rotor sail is planned for 2022.

Tuomas Riski, CEO of Norsepower, said, “We are delighted that Scandlines is expanding the use of our rotor sail technology after achieving the goal of reduced CO ² emissions on their first ship, the Copenhagen. The functionality of our rotor sail would be practically applicable to approximately 30,000 ships in the current fleet worldwide and we hope that this growing trust in wind propulsion technology will be a further signal to shipowners and operators."