A seven-meter (23-foot) long, wind-powered unmanned surface vehicle called a Saildrone has become the first unmanned system to circumnavigate Antarctica. The vehicle, known as SD 1020, was equipped with a suite of climate-grade sensors and collected data in previously uncharted waters.

The 196-day mission was launched from Southport in Bluff, New Zealand, on January 19, 2019, returning to the same port on August 3, after sailing over 22,000 kilometers (13,670 miles) around Antarctica. During the mission, the vehicle survived freezing temperatures,15-meter (50-foot) waves, 130 km/h (80 mph) winds and collisions with giant icebergs. 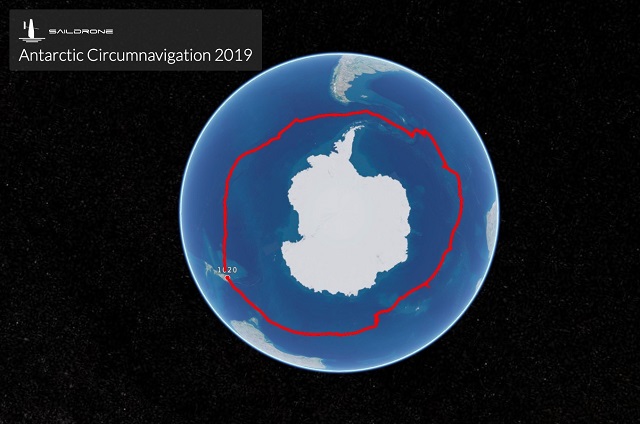 Carrying an instrument developed by the National Atmospheric and Oceanographic Administration (NOAA) to measure carbon fluxes, the Saildrone recorded evidence that the Southern Ocean released significant carbon dioxide during the winter months – a fact that could have major implications on global climate models.

SD 1020 was equipped with the standard Saildrone sensor suite which collects a variety of variables from wind speed and direction to sea surface temperature, chlorophyll and salinity. SD 1020 also carried an ASVCO2 to measure atmospheric and dissolved pCO2 (carbon flux), dissolved oxygen, water temperature, and pH, as well as an ADCP to measure the speed and direction of ocean currents.

Data from the First Saildrone Antarctic Circumnavigation has been released to the global scientific community on Saildrone’s new data portal, data.saildrone.com.

Saildrone's unmanned surface vehicles have traveled over 500,000 nautical miles to collect atmospheric, oceanographic, biogeochemical, and acoustic data from the Arctic to the Antarctic.