The hydrographic group of Russia's Northern Fleet has confirmed the discovery of five islands in Vise Bay on the Kara coast of the Northern Novaya Zemlya island.

Novaya Zemlya consists of two major islands, separated by the narrow Matochkin Strait, and a number of smaller islands. The two main islands are Severny (Northern) and Yuzhny (Southern). Novaya Zemlya separates the Barents Sea from the Kara Sea. The total area is about 90,650 square kilometers (35,000 square miles).

Over the past few years, the hydrographic group have been monitoring coastline changes in the Franz Josef Land and Novaya Zemlya archipelagos, and over 30 new islands, capes and bays have been discovered as glacial ice retreats in the region. Nine islands were discovered in 2015 when researchers on board the hydrographic ship Senezh explored the western part of Severny Island in the Barents Sea.

The region denotes the western end of the Northern Sea Route, and works began last year on a new port on the Novaya Zemlya archipelago to service the world's northernmost mining operation - the Pavlovskoye project. The port, to be built in Bezymyannaya Bay, will be owned by Rosatom, and the Pavlovskoye project to develop lead and zinc deposits on Novaya Zemlya is being run by the First Mining Company JSC. Construction is due to start in 2020, and operations are expected to commence in 2023. 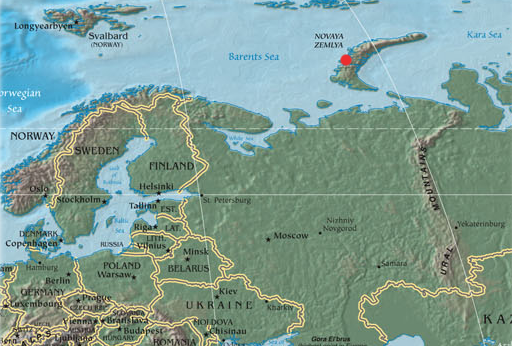