Last week, as the U.S. and its NATO partners conducted the largest drills in the alliance's history, the Royal Navy patrol ship HMS Tyne tracked a Russian frigate as it passed through the English Channel.

Tyne is the latest patrol vessel to be activated this year to monitor the activity of Russian surface ships sailing in or close to the UK’s area of interest. Patrol ship HMS Mersey, destroyer HMS Diamond, and frigate HMS Montrose have all been dispatched to observe Russian vessels passing the UK in recent months. 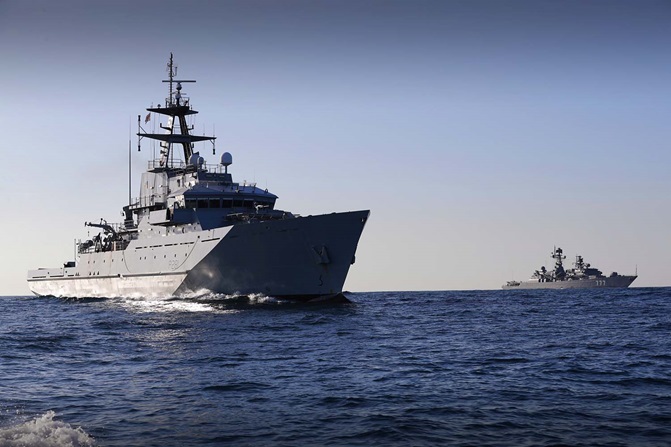 “Escorting foreign warships is not only a clear statement of our nation’s determination to protect our area of interest but is also a great opportunity for our people," said Lieutenant Peter Cowan, HMS Tyne’s XO. “It challenges the ship’s company by asking them to prepare and deliver a dynamic tasking and use their expert knowledge and experience to lead us to a successful mission.”

HMS Tyne is part of the Royal Navy's Fishery Protection Squadron. In her everyday role, she conducts marine enforcement operations with the UK's Marine Management Organisation, and she is occasionally tasked to help train new Royal Navy officers in navigation.

Tyne's sister ship HMS Mersey deployed on a similar mission last February to track three Russian Navy ships in the Channel. The deployment attracted attention from critics of the Royal Navy's force structure and capabilities, some of whom suggested that a better-armed frigate would be more appropriate for the assignment. "We always use the appropriate vessels for the task, and if you look at the photographs of the flotilla you'll see that a patrol vessel is the right one on this occasion," a Ministry of Defense spokesperson told the Telegraph.