The Royal Navy’s remotely-piloted air systems division has created three new teams ready to deploy to sea. Eight sailors at the 700X Naval Air Squadron have come together to form the three flights, and one extra member will join the team later in the year. Each flight consists of a commander as well as an air engineering technician and naval airman who each serve as remote pilots.

The system they will take to sea, the AeroVironment RQ-20 Puma, can be launched directly from a ship. It consists of a light-weight, hand-launched airframe and carries sophisticated cameras and flight systems. The system has been in service with U.S. Special Operations Command since 2008, and it has also been adopted by the U.S. Army, Navy, Air Force and Marine Corps. Commander Tim Flatman, the commander of the fixed-wing force at Culdrose, handed over certificates to the members of the new flights on the completion of their training. “This represents the end of a lot of hard work by you all and you are now ready to take this capability to sea. It was just over a year ago that the gauntlet was laid down to send a deployable capability to sea," he said. "The fact that we are on the brink of achieving it despite the recent challenges is truly outstanding." “It is great to be able to say that we have now completed the many months of training to take this remotely-piloted system to sea. We have two flights ready to deploy and a third to follow later in the year," said Lieutenant Commander Justin Matthews, the commanding officer of 700X NAS. “This is all about Royal Navy sailors flying from Royal Navy ships. The instructors and everyone at the squadron should be really proud of what we have all achieved as we move forward with this new technology."

The work and training by 700X NAS comes as the Royal Navy commits to investing in and embracing new technology. Its other prominent projects include an advanced autonomous minesweeping and mine countermeasures boat, dubbed MASTT, which garnered praise in cold-weather trials off Canada earlier this year. 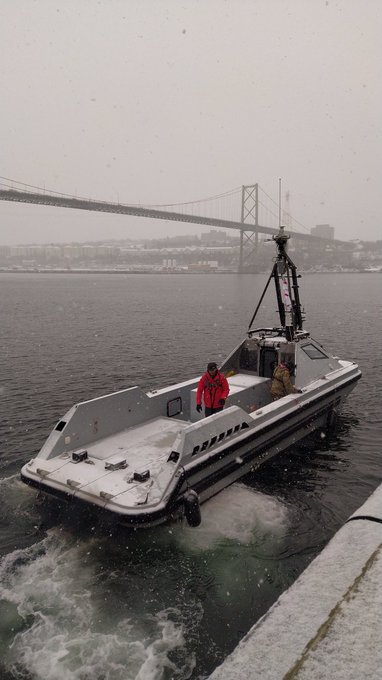