The LNG bunker vessel Cardissa has arrived in the Port of Rotterdam enabling Shell to supply clients throughout Europe with LNG from the Gas Access to Europe (GATE) terminal in Rotterdam.

The Cardissa can carry 6,500 m3 LNG. The 120-meter (394-foot) Cardissa is owned by Shell and co-financed by the European Union’s Connecting Europe Facility. In June, Cardissa was Singapore LNG Corporation's first small scale LNG reload at its terminal on Jurong Island, Singapore.

Shell has also signed a time charter agreement with Victrol N.V. and CFT for a bunker vessel with a 3,000m3 LNG capacity. The vessel will operate in Rotterdam and will provide additional flexibility to supply clients, including European inland waterway vessels.

Additionally, on Monday, a first LNG-fueled truck loaded a trailer with LNG at the GATE terminal, a joint venture of Gasunie and Vopak. It has been practically impossible to transport LNG using an LNG-fuelled truck due to regulatory restraints.

GATE terminal has experienced a 50 percent increase in truck loadings this year with around 750 trucks being loaded in the first half of 2017. Last year, the terminal was expanded to include a third berth and special infrastructure for the loading of small LNG vessels. These small LNG vessels enable distribution to LNG terminals in other North Sea and Baltic ports where large LNG tankers are unable to deliver directly due to their draught. 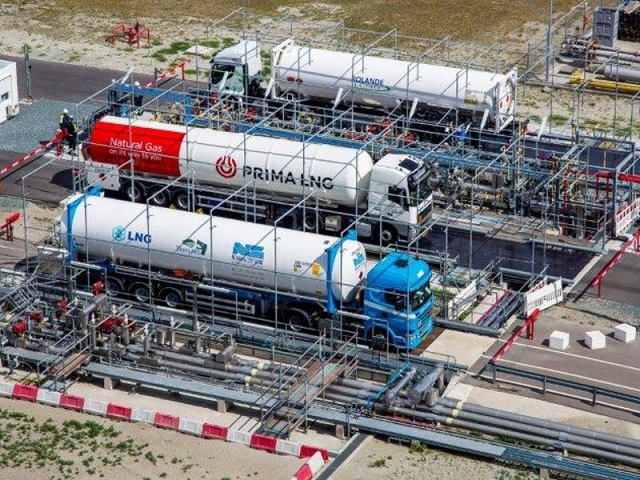 The U.S. Navy is exploring an unconventional option for a surveillance drone that can operate in "austere weather environments and multiple domains." The unusual-looking design takes off with four vertically-oriented propellers like a quadcopter, then transitions to horizontal flight with a pusher prop engine. According to defense contractor L3Harris, the new FVR-90 design does some things that current "runway independent" drones can't do. It needs no launcher or recovery device setup, and a team of two people can move, maintain...