Chantiers de l’Atlantique announced that it has received an order for two luxury superyacht cruise ships to be built for The Ritz-Carlton Yacht Collection. The order is one of only a few new cruise ship contracts to be awarded since the onset of the pandemic and is being called the next step in the development of the ultra-luxury cruise market.

The order is for the construction of two 46,750 gross ton cruise ships to be named Ilma and Luminara along with an option for additional cruise ships. Each of the new ships will measure 794 feet in length and will have accommodations for 456 passengers in 228 suites, each with a private balcony. Delivery is scheduled for 2024 and 2025.

The cruise line is saying that the ships will have the highest space ratio in the cruise industry while also providing the luxury standards associated with the Ritz-Carlton brand. They will also have a ratio of nearly one staff member for each passenger and special amenities, including five restaurants, six bars, and a spa, to reflect the luxury nature of the product. Each of the cruise line’s ships will also feature a retractable marina at the stern. 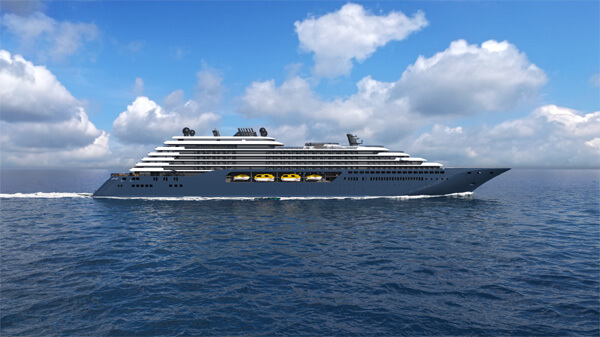 The new superyachts will also be outfitted with four dual-fuel engines making them the first small cruise ships to utilize LNG as their main fuel. To further incorporate sustainable practices, each vessel will be fitted with advanced water treatment systems, an efficient heat recovery loop, LED lighting, and other technologies with the goal of minimizing the environmental impact of their operations.

The order comes as The Ritz-Carlton Yacht Collection continues to delay the introduction of its first cruise ship. Citing further construction delays, the company earlier this month said it would reschedule the maiden voyage of its first ship for the sixth time to August 2022, fully 30 months behind the original schedule.

First announced in 2017, The Ritz-Carlton Yacht Collection planned to build three luxury cruise ships at the HJ Barreras shipyard in Vigo, Spain. The Ritz-Carlton Hotel Company, part of Marriott International, agreed to provide hospitality services and license the brand name to a new company set up by Douglas Prothero in collaboration with funds managed by Oaktree Capital Management. The company planned to launch in February 2020. The original ships, of which only one was built, are 25,400 gross tons with a length of 624 feet and capacity for 298 passengers and 246 crew. 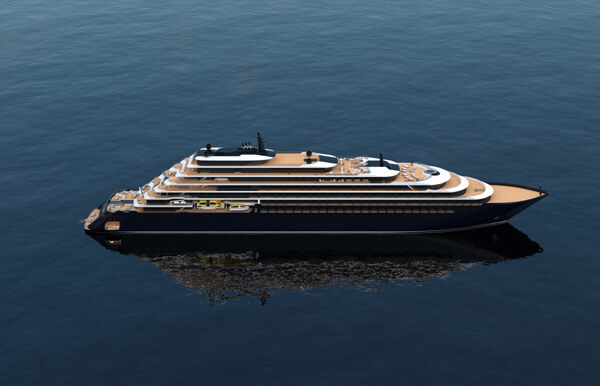 Construction of the first ship encountered repeated delays and the ship itself was renamed during construction from the originally planned name of Azora to Evrima. The keel was laid for the ship in January 2018 and launched 10 months later in Spain. The shipyard, however, encountered financial difficulties agreeing in 2020 to handover control of the still under construction ship to the cruise line which continued to oversee its fitting out. They later repositioned the ship to the Astander Shipyard in Santander, Spain.

“The next generation of superyachts for The Ritz-Carlton Yacht Collection will have a real impact in the industry and take our shared vision with management and Marriott International to the next level in the luxury cruise market,” said Karim Khairallah, Managing Director and Co-Portfolio Manager, European Principal Group, Oaktree Capital Management.

The new vessels are double the size of the first cruise ship, in part due to new safety regulations. The company said the increased size also permitted them to incorporate additional features into the design and larger spaces such as the marina. Plans call for the new ships to operate seven-to-10-night cruises in the Caribbean and Mediterranean and to be available for private charter.