Most port operations in Gibraltar, including bunkering, were again suspended as clean-up teams worked to control residual oil that leaked from the wrecked bulker OS 35. Fishing was suspended and some beaches were also closed with authorities advising against swimming after additional oil was released from the vessel.

The Gibraltar government reports that the salvage team was successful in their planned operation to sink the stern section of the vessel, which had remained afloat after the vessel cracked. As of Saturday, September 17, they reported that the stern was sitting on the sandy sea bed but waves and strong winds forced them to remove the floating barrier that had been maintained around the vessel.

While all the tanks had been pumped residual amounts of oil remain aboard the vessel and during the storm over the weekend, a sheen was reported around the vessel as well as reports of tar balls floating in the water. Most of the sheen was broken up by the weather, but some debris was also floating around the vessel. While they were working to reset the booms around the vessel on Tuesday, reports indicated that it appeared to be low sulfur fuel that was still escaping from the OS 35.

“Whilst the boom that surrounds the vessel continues to effectively reduce the amount of free-floating oil that is able to escape, it will never be able to contain it all entirely,” the government warned this morning in a statement. They advised that a variety of assets will remain on site through the night with boom deployed in “J” formation with sorbent pads, to mitigate the impact of oil that continues to escape. 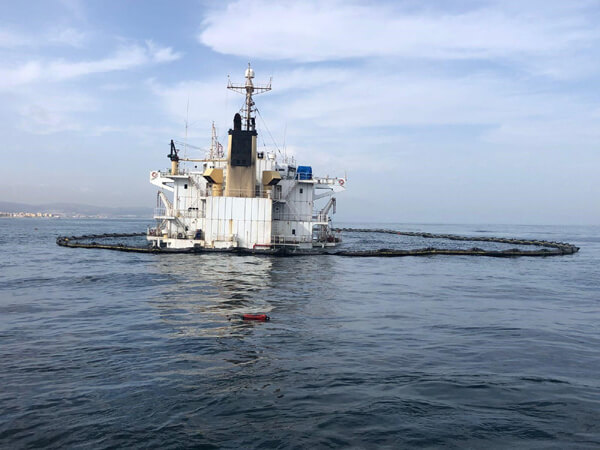 Spanish authorities have also been working on their portion of the bay to limit the progress of the oil as it moves toward the Spanish coastline.

The Gibraltar Port Authority advised that it would resume some limited port operations overnight on September 20 to 21 between 2100 - 0600hrs. They were planning non-bunkering at anchorage, only vessels that would be permitted alongside would be for crew changes and deliveries. Bunkering operations remain suspended for all vessels with the Port Authority saying it will continue to monitor and reassess the situation as it evolves. Recreational marinas are also closed with booms strung as a precaution against the oil in the water.

While the storm is being blamed for the release of the residual oil, the port captain reports that the condition of the vessel remained unchanged.