A Coast Guard rescue swimmer received the Meritorious Service Medal on Thursday during a ceremony at U.S. Coast Guard Sector North Bend’s base.

Petty Officer 2nd Class Chad Morris was recognized for his lifesaving actions on the morning of October 22, 2019. He responded to a fellow aircrew member who was suffering acute ventricular fibrillation leading to cardiac arrest while standing duty at Coast Guard Air Facility Newport.

The duty aircraft commander called on Morris, the duty rescue swimmer and emergency medical technician, after finding the duty flight mechanic slumped over a computer terminal not breathing and lacking a pulse. After directing a call to 911 and requesting an ambulance, Morris ordered the on-duty copilot to begin chest compressions.

Meanwhile, he ran to the helicopter to grab the automated external defibrillator and attached it to the unresponsive flight mechanic. While awaiting the AED scan Morris started mouth-to-mouth in coordination with the chest compressions. The initial scan form the AED reported “shock advised” and Morris quickly initiated the shock.

Morris also directed a call for assistance from the on-duty crew from the local LifeFlight station, and when the life flight duty crew arrived they administered medications and performed advanced airway procedures. The ill Coast Guard flight mechanic was quickly transported to Samaritan Pacific Communities Hospital in Newport and then transferred to Oregon Health and Sciences University Hospital in Portland for further care.

"Coast Guard rescue swimmers have a daily impact on the lives of the American public, but rarely do we get a chance to save one of our own," said Chief Petty Officer Roderick Ansley, chief of the Sector North Bend aviation survival technician shop. "Possibly rarer is a first tour rescue swimmer receiving the Meritorious Service Medal."

“Without a doubt, AST2 Morris’ actions were instrumental to saving the life of the Coast Guard flight mechanic,” said Capt. Kevin Nolan, Sector North Bend’s flight surgeon. “He recognized the medical emergency and took decisive action. His quick decision to use the AED is what brought the flight mechanic back to life.”

The Meritorious Service Medal is a military award presented to members of the U.S. Armed Forces who distinguished themselves by outstanding achievement during peacetime. 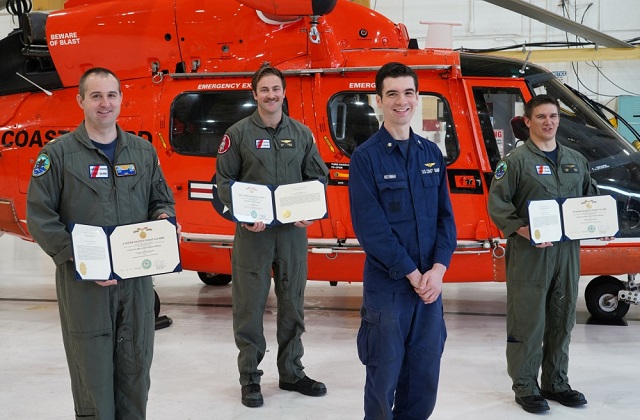