Report: Bourbon Rhode Had Leaking Hatch Prior to Her Sinking

Survivors and former crewmembers of the lost tug Bourbon Rhode have told investigators that the vessel was not in fit condition prior to her final voyage, according to her flag state of Luxembourg.

In July 2019, Bourbon Rhode entered a six-week shipyard period at the port of Las Palmas, part of her preparations to transition from 12 years of service off Nigeria to a new contract off Guyana. She departed shipyard on September 17, bound for Guyanese waters. In addition to her crew, she carried one supernumerary, a fitter who had joined the ship to carry out "steel works that had not been completed at the shipyard."

On September 25, as she transited the mid-Atlantic, she encountered strengthening winds from Hurricane Lorenzo - a Category 3 hurricane with winds of up to 110 knots. She did not alter course, and she was on track to pass through the hurricane's northern quadrants, within 35 nm of the epicenter.

At 0750 the following morning, Bourbon Rhode sent a distress signal via GMDSS. Her crew activated their EPIRB 15 minutes later. At 0845, the vessel's master informed the home office that the vessel had flooding in the engine room and was likely going down. "We have no more engine, they are all down. All crew muster, ready and on standby . . . Life rafts not possible to launch, very rough seas, swell [30 feet] or more," wrote the master at 0945. The vessel's last AIS position report was received at 1243.

Bourbon Rhode was located nearly 1,000 nm from the nearest land, so the marine rescue coordination center in Martinique called upon nearby merchant ships to assist her crew. The bulkers SSI Excellent and Piet diverted to the scene, and on the afternoon of September 28 - two days after the sinking - the Piet's crew retrieved three survivors from a liferaft. The bodies of four other Bourbon Rhode crewmembers were also recovered; seven were never found.

A technical inspection of the Bourbon Rhode dated March 8, 2019 recommended new belowdecks inspection covers for the watertight compartments for the tug's hydraulic shark jaws, towing pins and cable lifter, the retractable anchor-handling tools that were fitted into flush deck housings at the vessel's stern. The inspector called for new covers to be "fabricated and installed with rubber seals to prevent ingress of water in compartments during rain or heavy sea when they are not in use." The bolt holes for the cover fastening also needed to be re-threaded, according to the report. Photos of the existing covers were included in the inspection report, accompanied by the caption "Shark Jaw comp. leaking cover." 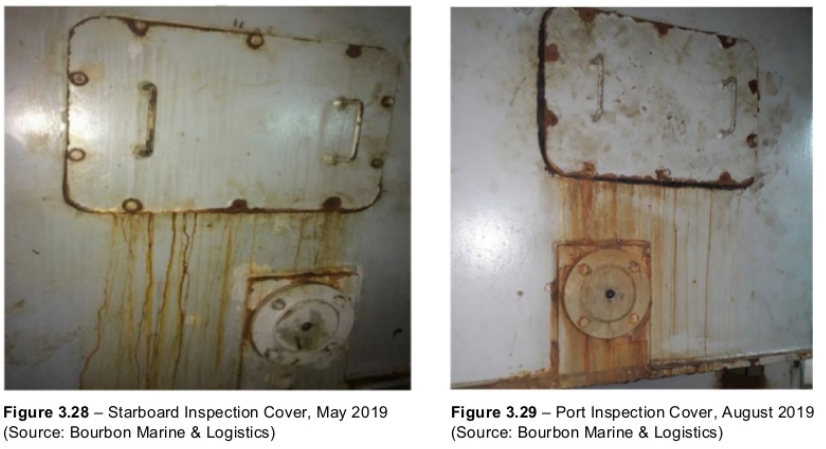 According to the flag state report, some of the "work that was intended to be done at the shipyard was not performed due to missing materials or tools," and a survivor told the flag state investigation that "the chief engineer reported to the master before departure that the vessel was not fully ready for the intended voyage due to the pending repairs and maintenance."

The engine room skylight hatch had not been repaired during the drydocking, and water was reportedly leaking through the hatch into the engine room. The problem was largely fixed while under way, except for small drops. Bilge alarm system faults were also common, according to the survivors, and former crewmembers said that this had been the case for some time during the vessel's prior service.

According to survivors, on Bourbon Rhode's final morning, flooding began in the Z-drive compartment with water ingress through the inspection covers for the shark jaw housing frame. The flooding was detected at 0600, and it reached the bottom coaming of the bulkhead hatch by 0615, threatening to short out electrical controls for propulsion and steering. The fitter managed to stop the leakage at one of the inspection covers in the z-drive compartment, but not the other. Meanwhile, water began to wash into the engine room through the skylight hatch. The vessel lost steering and propulsion at 0734, and she was left adrift and listing with the hurricane approaching.