In 1915, the “Act to Create the U.S. Coast Guard” was signed, merging the Revenue Cutter Service and U.S. Life Saving Service to form the modern-day Coast Guard. The merging of these two organizations formed a service whose unique capabilities would prove to be invaluable just six month later on the Great Lakes.

Early on the morning of July 24, 1915, 7,000 employees and guests of the Western Electric Company gathered on a wharf between LaSalle and Clark streets on the Chicago River to board five steamers heading to a company picnic in Michigan City, Indiana.

One of those vessels, the S.S. Eastland, quickly filled to its 2,500-person capacity and prepared to leave the wharf for a four-hour journey to the picnic location. Due to a heavy stream of passengers embarking on the gangplanks, ballast water was added to the vessel to correct a list to the port side. Just as deckhands began to cast lines off, the steamer listed again and then capsized into the Chicago River, sending hundreds into the water and trapping many more below decks.

Petty Officer 1st Class William E. Preston had the duty watch of Station Old Chicago that morning and was first alerted of the disaster at 7:30 a.m. He and seven other surfmen who rushed to the scene responded to what became the modern-day Coast Guard’s first major rescue operation, according to the Coast Guard Historian’s Office. 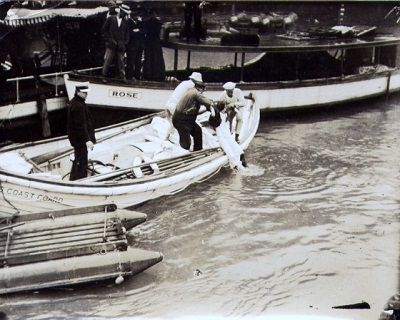 When Preston and his crew arrived at the Eastland, they joined hundreds of others in the rescue and recovery efforts from the Chicago River. During the first day alone, the Coast Guard rescued 84 people and recovered 570 of the 844 who perished. At least 1,656 passengers survived the ordeal.

Ever since its maiden voyage in 1903, the Eastland frequently suffered from instability due to design flaws. A high center of gravity and top-heaviness made the ship prone to listing, which occurred during boarding of the vessel on the morning of July 24, 1915. Additionally, the Eastland’s ballast system was slow to react in changes to weight distribution and had no side-to-side transfer. These factors, along with a ship filled to absolute capacity or even overcapacity, were probable causes of the fateful capsize.

On the heels of the sinking of the Titanic just three years earlier, lessons were also learned from the Eastland disaster. In the years to follow, maritime safety responsibilities fell under various agencies and organizations including the Steamboat Inspection Service, Bureau of Navigation and Bureau of Marine Inspection and Navigation. By 1946, all responsibilities were transferred to the Coast Guard.

Today, Coast Guard marine safety personnel ensure that commercial vessels are in full compliance with applicable federal laws and regulations. Marine inspectors ensure that vessels are seaworthy and properly maintained, that vessel repairs are made in accordance with established standards, that crews are adequately trained and proficient in their duties, and that lifesaving and firefighting equipment are properly maintained and readily available.

Station Old Chicago is still in service to this day. Now known as Coast Guard Station Chicago, it is a seasonal detachment falling under the command of Station Calumet Harbor and shares the location with the Chicago Police Marine and Helicopter Unit, Chicago Fire Department and Illinois Conservation Police.

This weekend, 100 years later, representatives from Marine Safety Unit Chicago and Coast Guard Station Calumet Harbor will participate in ceremonies marking the anniversary of the disaster on the same spot in the Chicago River.