The ReCAAP Information Sharing Centre has issued an incident alert on incidents involving ships while underway in the eastbound lane of Singapore Strait.

The alert follows an earlier one in October and comes after more incidents were reported in the eastbound lane of the Traffic Separation Scheme (TSS) of the Singapore Strait.

Three actual incidents occurred in the eastern sector of the Strait within a period of five days during November 23-27. The incidents involved bulk carriers and one tug and barge and occurred while the vessels were underway during the hours of darkness. Additionally, an attempted incident occurred on a chemical tanker in the western sector on October 25. Another attempted incident against a chemical tanker was reported on November 5 in the westbound lane of TSS in the western sector of the Strait when the tanker was on the way to the eastbound lane. 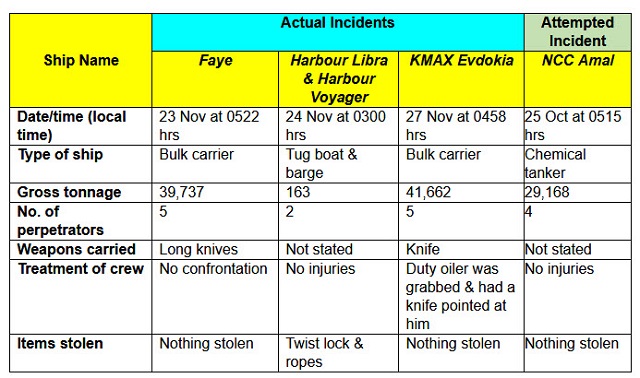