Greenpeace protesters dangling from a bridge in Portland, Oregon, on Thursday have forced back the icebreaker that Royal Dutch Shell needs in Alaska to start drilling in the Arctic.

The 13 Greenpeace protesters, who rappelled down from the bridge over the Willamette River early on Wednesday, are hoping to shorten Shell's Arctic drilling season by stopping the Fennica icebreaker, which is carrying emergency equipment that would cap any blown-out well.

Shell is not allowed to start drilling without it and the drilling season ends in October, when sea ice encroaches.

Greenpeace says Arctic drilling could be damaging to populations of whales, polar bears and walrus if there is an oil spill.

The activists are the latest group to stage waterborne demonstrations over the past three months in a bid to block Shell vessels from heading north, following similar demonstrations in Seattle and other Washington state port areas. 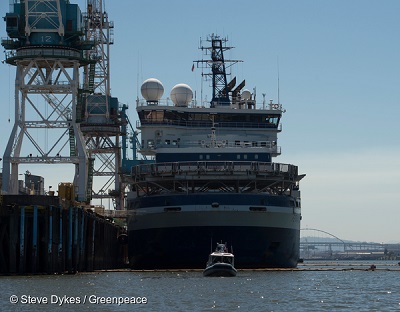 The Fennica stalled once it neared the St. John's Bridge on the Willamette, which leads to the Pacific Ocean. Protesters lowered themselves with ropes to prevent the ship from passing under the span, forcing the vessel back to port.

By late Thursday morning, more than two dozen kayakers were also on the river flanked by protesters dangling from ropes with large red and yellow banners chanting "Shell No" as a Coast Guard boat stood watch. The bridge has been opened to road and water traffic, and protesters are letting all other vessels pass under the bridge.

"When that ship turned, that was history," said kayaker Michael Foster.

Later on Thursday, a firefighter descended from the bridge and slashed part of a rope linking protesters, local broadcast footage showed. A few minutes later, two activists lowered themselves down from the bridge toward a boat and were arrested, Multnomah County Sheriff's Office spokesman Steve Alexander said.

Dozens of kayakers were pushed to one side of the river by waterborne U.S. Coast Guard backed by sheriff's deputies on loud speakers. The bridge and the river were closed to traffic.

Onlookers sympathetic to the protests gathered in a nearby park and occasionally cheered in support. Two activists were issued police citations, Greenpeace said.

The “Struggle for a Better World”

“In the struggle for a better world, these thirteen courageous souls are currently the last line of defense for the fragile Arctic,” said Kumi Naidoo, Executive Director of Greenpeace International. “This morning they turned Shell’s dangerous drilling support vessel around. On behalf of millions of people around the world they are saying Shell no to Arctic oil drilling. It is now time for President Obama to listen to the growing movement in the US and beyond. It is not too late for him to revoke Shell’s lease to drill and to send this ship back to port permanently.”

The 13 Greenpeace USA climbers remain suspended below the St. John’s Bridge, along with 13 more activists on the bridge providing support. They are prepared to hold the line as long as possible. 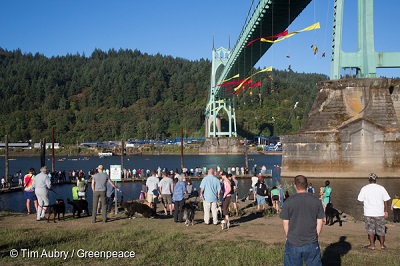 The U.S. Coast Guard issued warnings to the protesters, saying they were unwelcome, trespassing and violating the safety zone.

"Our primary concern is for the safety of the individuals on the water," Coast Guard Petty Officer George Degener said. "We want them to understand we want them to exercise those First Amendment rights but we want them to be safe."

Shell spokesman Curtis Smith said the company respects the rights of individuals to protest. "We just ask that they do so safely and within the boundaries of the law," he said.

As the protests stretched into the afternoon, a U.S. judge in Alaska held Greenpeace in contempt and ordered it to pay fines of $2,500 per hour if the protest continues, with fines increasing daily to a rolling $10,000-per-hour after August 2.

Greenpeace USA Executive Director Annie Leonard said in a statement the organization was evaluating its options but that its protesters would stay in place for the time being.

"While we respect the courts, we also respect the increasingly urgent science that tells us Arctic oil needs to stay underground," Leonard said.

Shell hopes to return to the Arctic for the first time since 2012, when it experienced a series of mishaps including the grounding of the oil rig Kulluk.