The Netherlands Coastguard and the Maritime Police are onsite at the scene of an allision that took place overnight in the busy Ijumuiden anchorage off the coast of the Netherlands. The authorities are reporting that a small oil leak from the tanker has been stopped while they continue to investigate.

The Coastguard received reports of the allision at 3:00 a.m. local time. The product tanker Golden Daisy, which was at anchor, reported that it had been struck by a vessel which was later identified as a fishing vessel the ARM 18 Joris Senior.

The 505-foot tanker registered in Hong Kong and operated by Seacon Shipping Group of China suffered an above the waterline gash. Initial reports indicated that the tanker was leaking oil from the gash and the Coastguard dispatched airplanes and a patrol boat along with an oil spill control vessel. The investigation determined that the tanker’s portside wing tank had been holed when the vessel was struck resulting in the gash about three feet above the waterline. As the vessel is riding high the gash is about 12 feet above the current water level.

The wink tank was holding a mixture of oil and water that was seen leaking down the side of the vessel. The crew aboard the Golden Daisy was able to stop the leak by pumping the contents of the tank into another tank. The Coastguard plane is still investigating the spill but they are reporting that it was small and likely to dissipate. Due to the small amount of contamination, the Coastguard reports it was not planning any further action. 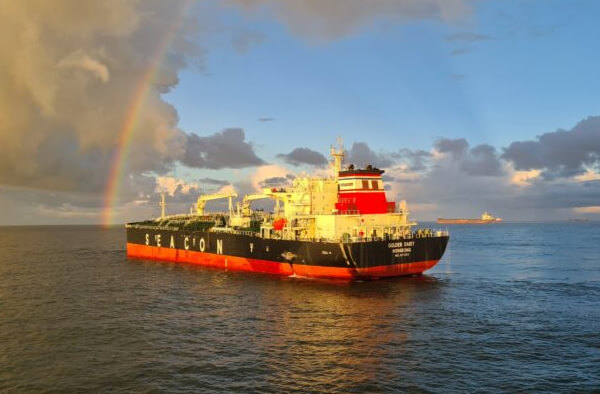 The 34,800 dwt Golden Daisy had transferred to the anchorage on September 28 after spending four days in Amsterdam. She had arrived in the Netherlands on September 24 from Italy and had apparently at least partially offloaded in Amsterdam.

The 30-year old fishing vessel had departed the Netherlands on September 24 and was inbound to Ijmuiden when she struck the tanker. The 150-foot long fishing vessel was able to proceed under its own power to port. Photos of the vessel show significant damage to its bow.

The Netherlands’ Maritime Police and the Environmental and Transport Inspectorate are investigating the incident. The Coastguard’s patrol vessel Osprey is standing by the tanker which remains in the anchorage but they are reporting that the vessel is in no danger.