NYK Group has launched a new future concept pure car and truck carrier that has been designed to be emission-free: the “NYK Super Eco Ship 2050.”

The power needed to operate the ship has been cut by 70 percent by remodeling the hull to decrease water friction, an air-lubrication system, reduced hull weight, fuel cells for electric propulsion and the incorporation of flapping foils that mimic the movements of dolphins.

Computer-controlled devices, such as gyro stabilizers, are also installed to provide active stability for the lightweight vessel hull, and automatic hull cleaning during port stays prevents any negative impact on vessel efficiency.

Instead of fossil fuels, power for the ship would come from solar energy and hydrogen produced from renewable energy sources to produce a zero-emission vessel. Waste heat recovered from the fuel cells is also used. On long voyages, solar power can be utilized.

Maintenance is managed through use of digital twins, a technology that realizes physical conditions digitally and enables real-time analyses from land offices, accident prevention and optimal maintenance.

Optimization of route planning is no longer a ship-level activity, says NYK. It will be done at port and on a fleet level, which will enable just-in-time arrival throughout the supply chain. Automatic mooring and efficient ship-to-ship cargo handling will minimize port stays.

For the design, NYK teamed up with MTI and Elomatic to review the technical advances conceived for NYK’s previous concept ship (i.e., NYK Super Eco Ship 2030, created in 2009) and design an updated version that makes use of advances digitalization technology. 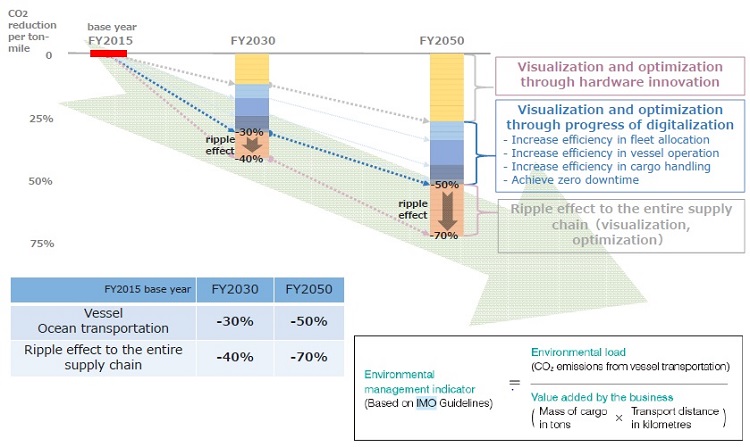