The National Transportation Safety Board has determined that the assumptions and poor communications of an OSV captain were responsible for a collision with a U.S. Coast Guard buoy tender in Sabine Pass, Louisiana in 2020. 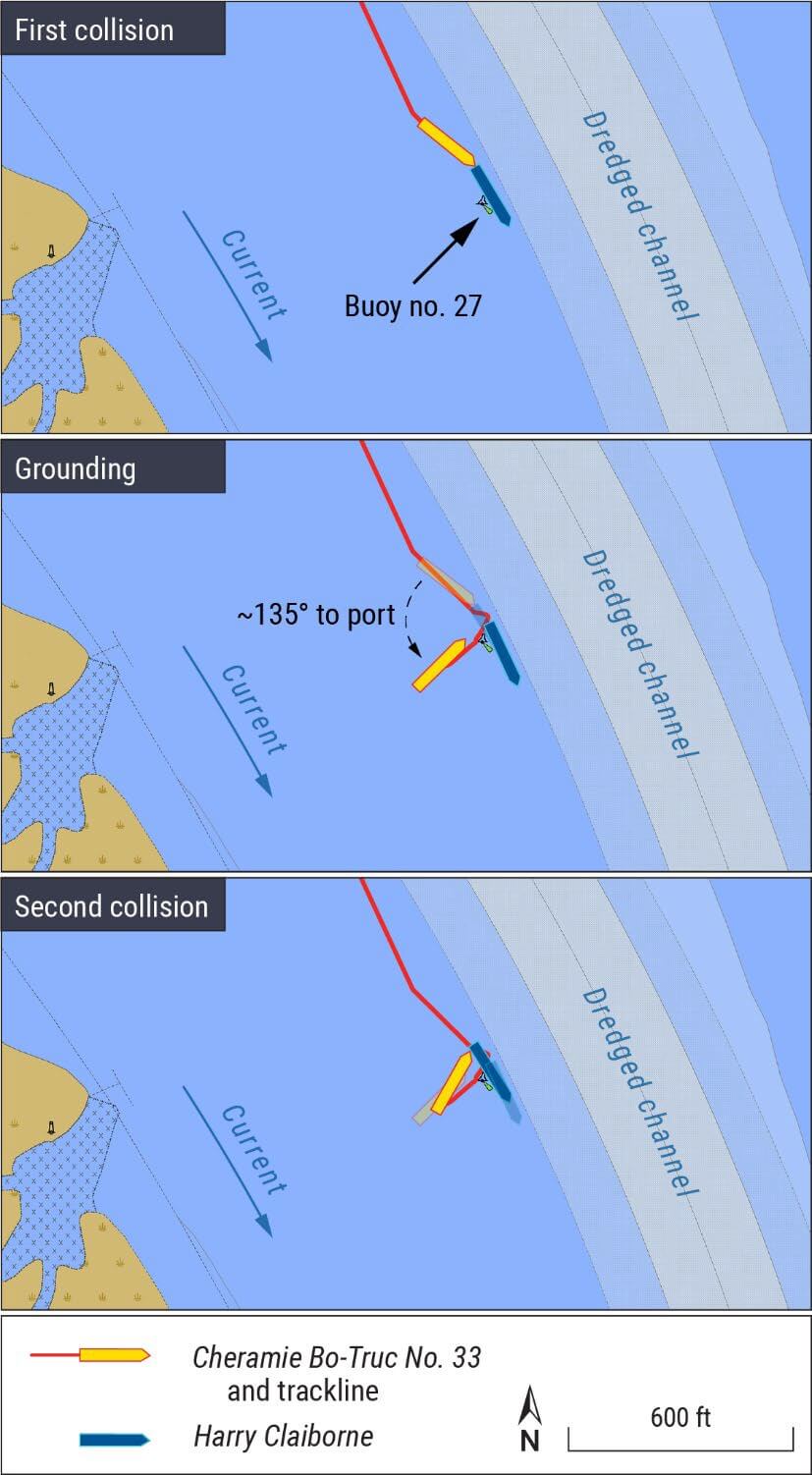 In Oct. 11, 2020, the OSV Botruc 33 was traveling outbound in Sabine Pass when it struck the stern of the buoy tender Harry Claiborne near Texas Point. The Botruc 33 then ran aground. The crew attempted to refloat the vessel, and when it refloated, the current set it towards the buoy tender, resulting in a second collision (diagram at left, courtesy NTSB). Three crewmembers aboard the Harry Claiborne suffered minor injuries. Damages for the two vessels totaled more than $500,000, including about $440,000 in damages to the Harry Claiborne.

Two days before the collision, Hurricane Delta swept through the area and moved several buoys in Sabine Pass off their assigned locations. On Oct. 11, the Harry Claiborne transited to Sabine Pass to service misplaced buoys. As Harry Claiborne was stationary in the channel and servicing a buoy, the captain of the approaching OSV Botruc 33 called the Harry Claiborne by VHF radio, and he asked to overtake on the buoy tender's starboard side.

The captain told investigators that he “didn't realize that the buoy was on location" and had assumed the Claiborne was servicing a buoy that had moved into the channel. As the Botruc 33 was attempting to overtake the Claiborne, the depth sounder quickly dropped, and the captain aborted his attempt to pass in an effort to avoid running aground.

Despite the captain's efforts, the Botruc 33 collided with the buoy tender. Two crewmembers on the Harry Claiborne sustained minor injuries. The offshore supply vessel then grounded in the mud alongside the channel.

"I thought they were moving the buoy, because when I asked him for one whistle [starboard side overtaking arrangement], he agreed, and then I asked him another time, he agreed. So I just assumed he knew what the depth of the water was, and that's where I was good to pass there," said Capt. Richard Lege, the master of Botruc 33, at a post-casualty debriefing. "Being the buoys was moved and everything and he's working on the buoys, the way he was set up, I was like, okay, let me see, you know. And I never was advised that the water - the depth was shallow or maybe you want to come around on the other side, you know."

The crew of the Botruc 33 informed the Coast Guard Vessel Traffic Service (VTS) of their plans to refloat the vessel and get under way, but they did not communicate their plans to the crew of the Harry Claiborne. The crew worked for 45 minutes to get the vessel out of the mud. As they attempted to maneuver around the buoy tender's stern, the Botruc 33's bow struck the Harry Claiborne's starboard quarter. A Coast Guard crewmember sustained minor injuries due to the collision.

The NTSB determined the probable cause of the initial collision was "the offshore supply vessel captain's assumption of the stationary cutter's position, which led to his decision to pass the vessel outside the channel, resulting in a late maneuver toward the Harry Claiborne to avoid running aground."

NTSB found one contributing factor: the Claiborne's crew did not question the passing arrangement proposed by the offshore supply vessel captain. The board concluded that the second collision was caused by the lack of communication between the two vessel operators when the Botruc 33 refloated.