The NTSB has released the results of its investigation into the fatal collision between the product tanker Bow Fortune and the fishing vessel Pappy's Pride near Galveston last year. The agency concluded that the captain of the Pappy's Pride failed to respond to warning signals and VHF calls from the Bow Fortune,

On the afternoon of January 14, 2020, the tanker Bow Fortune was headed inbound to the port of Galveston, Texas. Conditions outside the channel entrance were foggy, but the pilot reported that visibility was clear within the harbor, and he and the master decided to proceed. With a lookout posted on the bow and the fog horn turned on, they got under way into the Outer Bar Channel at about 1508 hours.

Meanwhile, the Pappy's Pride was outbound and headed for sea. Visibility was poor, estimated at just a few hundred yards. At 1534, she exited an anchorage and approached the shipping channel from the north, on a course that would cross Bow Fortune's bow. 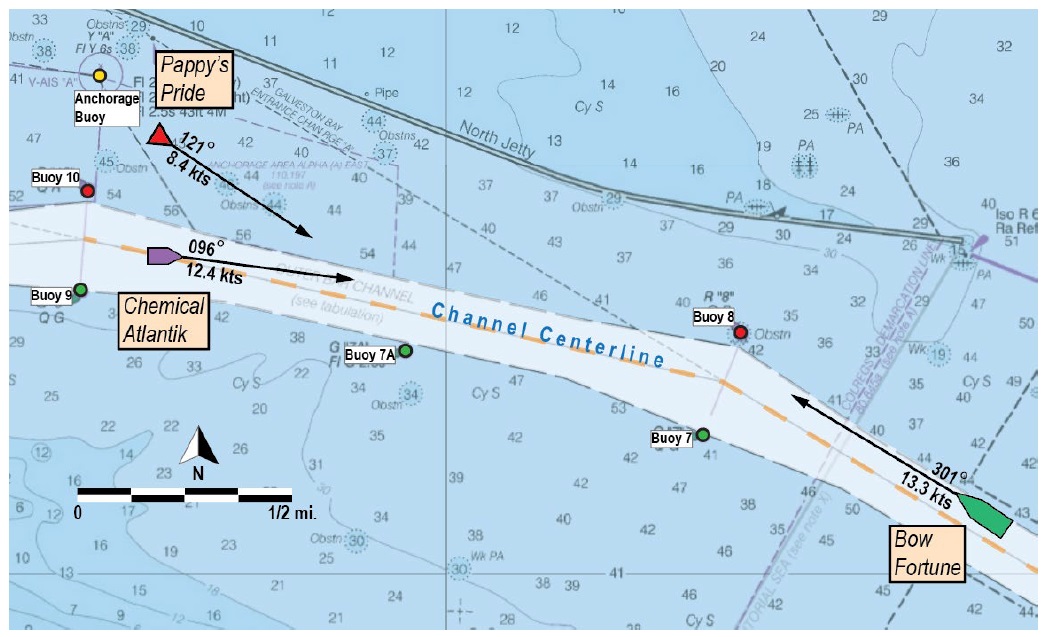 At 1535, Bow Fortune's pilot hailed Pappy's Pride on VHF, turned to starboard to avoid collision and slowed to half ahead. One minute later, he sounded five short blasts on the horn and ordered multiple evasive maneuvers. He hailed the fishing vessel again.

By 1537, Pappy's Pride was just 350 yards ahead, and closing fast. The pilot sounded five short a second time, hailed the vessel on VHF a third time and ordered all stop. The tanker's bow struck the fishing vessel a few seconds later, causing Pappy's Pride to capsize and sink.

One surviving deckhand from Pappy's Pride was pulled from the water by the pilot boat Yellow Rose, and the remains of a second deckhand were recovered by a USCG response boat. The bodies of the remaining two crewmembers were recovered when the wrecked vessel was raised on January 30.

NTSB noted that Pappy's Pride had multiple tools on board to avoid collision, including a functioning VHF radio, ARPA, AIS and electronic chart system, but she did not seem to respond to Bow Fortune's presence or the pilot's attempts to communicate. The fishing vessel's captain had the conn during the transit, and the vessel's AIS trackline suggested that he was actively steering in the minutes leading up to the casualty - but he did not take evasive action or respond.

"It is possible the captain [of Pappy's Pride] was away from the conn, was distracted, fell asleep, was unsure of what action to take, or was otherwise unable to respond to the developing situation," NTSB concluded. "Communication, especially in limited visibility, is a vital part of standing an effective watch. In addition, the Pappy’s Pride’s outbound course created a close quarters situation that resulted in the collision."

NTSB noted that the captain’s failure to slow down or respond could have been due to a medical event. Investigators found that he had had a minor stroke three weeks before the casualty voyage, and he had been in the hospital for three days before his condition improved.