[Brief]  Norwegian Cruise Line’s 165,000 gross ton cruise ship the Norwegian Escape went aground this afternoon as it was departing the Dominican Republic. Officials are reporting that the ship is safe and that tugboats have been sent to investigate the situation.

The 1,092-foot long ship departed Port Canaveral on Saturday, March 12 for a seven-day cruise to the Caribbean. Puerto Plata was the ship’s first port of call and according to the report she was departing in windy conditions and as she came out of the harbor grounded. Passengers reported feeling a “thud” and said the ship was currently “leaning” to her port side. At last report, she has been stuck for at least two hours, with passengers saying on social media that the ship will remain in its current position overnight. 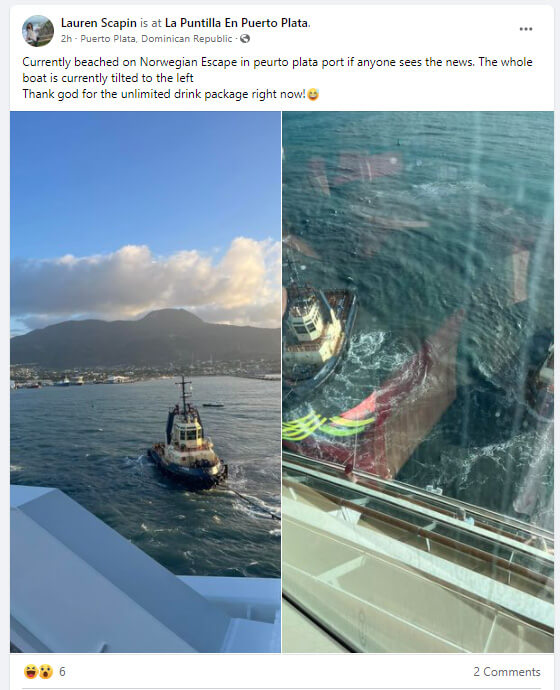 Tug can be seen around her while spectators are gathering onshore. It is unknown how many passengers were aboard the cruise. Her next scheduled port of call was St. Thomas, followed by Tortola and then NCL’s private island in the Bahamas.

The grounding comes as the Dominican Republic was marking an upswing in cruise visits and passengers. According to the newspaper El Atlantico, 11,700 cruise passengers visited the country’s two ports last week aboard a total of seven cruise ships, a new peak for the winter season. Counting crewmembers, over 18,600 foreigners arrived by cruise ship last week in the Dominican Republic.

Government officials were expected to brief the media this evening about the grounding of the Norwegian Escape and the efforts to refloat the cruise ship.