On May 14, Norwegian Cruise Line’s new 168,028-gross ton Norwegian Bliss became the largest passenger ship to ever transit the Panama Canal. The successful transit coincides with another milestone in the Canal's expansion - the addition of another Neopanamax reservation slot.

The Norwegian Bliss entered the Atlantic side of the Canal as part of her current cruise from Miami, to Los Angeles. Ultimately, the new ship is headed to Seattle to begin a series of seven-day cruises to Alaska. She is scheduled to make a return transit of the Panama Canal on November 13, 2018 positioning for a winter 2018-2019 deployment of Caribbean cruises from Miami. 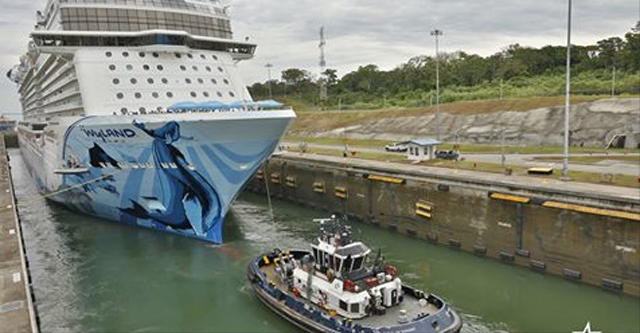 With a length of 1,069.2 feet (325.9 meters) and a beam of 135.8 feet (41.4 meters), Norwegian Bliss' transit was made possible by the new locks that the Panama Canal introduced less than two years ago. The Norwegian Bliss has a capacity of 4,004 passengers double occupancy is about 100 feet longer and 20 feet wider than other large cruise ships that have transited the Canal.

However, the ship is dwarfed by the largest Neopanamax container ships, such as the COSCO Development, which in May 2017 became the largest vessel to transit the Panama Canal. The COSCO Development has a 13,345 total TEU allowance (TTA) and measures 1,202 feet (366.45 meters) in length and has a beam of 159.4 feet (48.26 meters).

Since the beginning of its current fiscal year on October 1, 2017, the Expanded Canal has transited 1,183 Neopanamax vessels including container ships, LPG, LNG, dry bulk and cruise ships for a 39 percent increase in transits year on year. 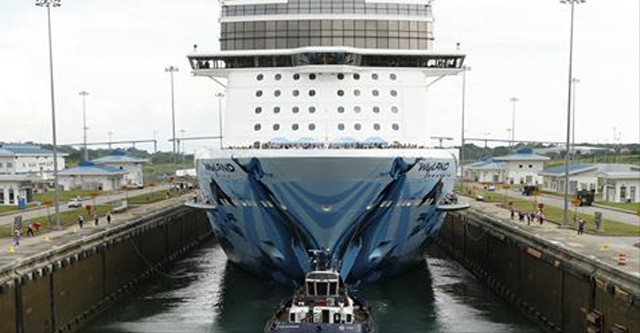 This week's transit of Norwegian Bliss marks the next step in the continuing expansion of the Panama Canal. Last week, the Panama Canal Authority announced they are adding an eighth daily reservation slot for the Neopanamax locks and effective June 1, 2018, the maximum beam will be increased to 168.14 feet (51.25 meters) up from the previous limit of 160.8 feet (49 meters).

During the current cruise season, between October and May, a total of 248 cruise ships with a total of 312,304 passengers will transit the Canal according to the Panama Canal Authority. Last October, Princess Cruises’ Caribbean Princess had become the first cruise ship in commercial service to use the new locks. By the conclusion of the current season, a total 20 Neopanamax cruise ships will have made the transit, including Disney Cruise Line’s 984-foot long Disney Wonder, Carnival Cruise Line’s Carnival Freedom and Carnival Splendor and Princess Cruises’ Caribbean Princess. Each of those ships measures approximately 950 feet in length with a beam of approximately 116 feet.

In addition to its impact on the commercial shipping industry, the Panama Canal’s increased capabilities permit the cruise lines for the first time to more easily redeploy their largest cruise ships between the key markets in Europe and the Caribbean along with Alaska, Asia and Australia.