Efforts are continuing to build out the LNG infrastructure with two of the latest additions coming in the Mediterranean. Avenir LNG recently took delivery of a new LNG supply and bunkering vessel, which will be operating from Sardinia, Italy, while European energy company Edison christened a new LNG carrier that is one of the world’s smaller gas carriers built to supply a terminal in northeast Italy on the Adriatic. Both vessels are part of efforts to expand LNG services in Italy.

The Avenir Aspiration will embark on her maiden voyage to Europe where she will be stationed in the Mediterranean and begin supplying LNG to Avenir’s HIGAS LNG Terminal in Sardinia, which entered into commercial operations in August 2021. In addition to servicing Avenir’s demand, the Aspiration will provide LNG bunkering services via ship-to-ship transfer to multiple customers throughout the Mediterranean.

“The Aspiration is the final step in delivering a fully owned and operated small-scale LNG supply chain dedicated to serving our customers across the island of Sardinia,” said Peter Mackey, CEO of Avenir LNG. “We have made significant investments in LNG shipping, terminaling, trucking, and satellite plants at our customers' sites to ensure we can deliver a clean, affordable and reliable supply of LNG to the island.”

The 380-foot vessel joins two similar vessels that were built for Avenir at Keppel Singmarine. Avenir also has a sister ship and two larger 20,000 cbm from CIMC due for delivery over the remainder of 2021 and early 2022. 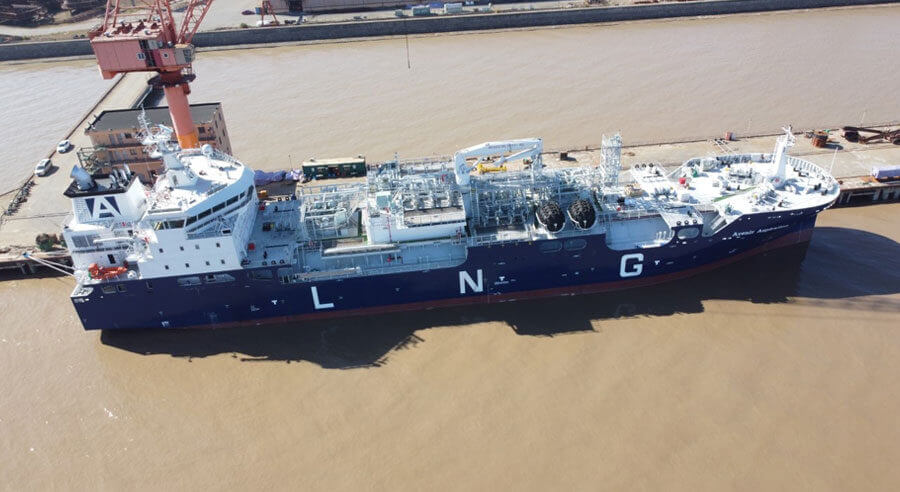 Today, October 11, Edison in conjunction with Knutsen OAS Shipping also help the naming ceremony for the Ravenna Knutsen, one of the world’s first small LNG carriers, as part of the ongoing commissioning of a new LNG terminal at the Port of Ravenna in northeast Italy. With a capacity of 30,000 m3, the 590-foot-long gas carrier has a high level of operational flexibility and will be part of the first integrated small-scale LNG logistics chain in Italy, which Edison is building to promote the decarbonization of maritime and heavy transport.

Built by Hyundai Heavy Industries at the Mipo shipyard in South Korea and delivered in February 2021, the LNG carrier is equipped with a 7450 kW two-stroke dual-fuel engine, fueled by LNG and marine diesel. It also has three dual-fuel generators of about 1480 kW each that supply the ship’s electrical needs, a shaft generator that optimizes the ship’s internal consumption, and a liquefaction unit that allows the pressure inside the tanks to be managed more flexibly and efficiently.

The ship is operating on a 12-year charter from Knutsen dedicated to Edison's small-scale supply chain. It can transport up to 30,000 m3 of LNG through three tanks (b-lobe c-type) made of high-nickel steel and capable of withstanding cryogenic temperatures. It is also equipped with a double set of manifolds (both low and high), giving it greater operational flexibility.

In September, the Ravenna Knutsen carried out the first offloading of liquefied natural gas at the Ravenna coastal depot. After taking its first cargo of LNG at the Enagás plant in Barcelona, Spain, it docked at the quay in front of the port’s coastal depot of Ravenna, starting the controlled tank filling operations, preparing for the commissioning of the plant scheduled for the end of October.