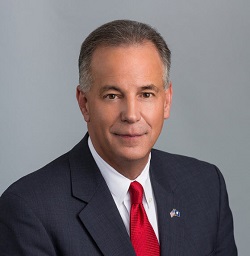 Former Louisiana state official Scott A. Angelle has taken up the position of Director of the U.S. Bureau of Safety and Environmental Enforcement (BSEE) which oversees safety on the U.S. outer continental shelf.

“Scott Angelle brings a wealth of experience to BSEE, having spent many years working for the safe and efficient energy production of both Louisiana’s and our country’s offshore resources,” said Secretary of the Interior Ryan Zinke.

“As we set our path towards energy dominance, I am confident that Scott has the expertise, vision, and the leadership necessary to effectively enhance our program, and to promote the safe and environmentally responsible exploration, development, and production of our country’s offshore oil and gas resources.”

Angelle, who will serve as the fourth director in BSEE’s history, has held numerous positions in Louisiana State and Parish governments, including Interim Lieutenant Governor, Secretary of the Louisiana Department of Natural Resources and St. Martin Parish President. Angelle most recently served as Vice Chairman of the Louisiana Public Service Commission.

In the aftermath of the BP oil spill, Angelle served as liaison to the federal government, and negotiated an early end of the previous administration’s drilling moratorium.

“I welcome the opportunity to serve President Trump and Secretary Zinke and work with BSEE staff to meet the critical goal of energy dominance for our country,” said Angelle. “It is an exciting and challenging time for BSEE. I look forward to leading our efforts to empower the offshore oil and gas industry while ensuring safe and environmentally responsible operations.”

Angelle served for eight years as Louisiana’s Secretary of the Department of Natural Resources. Under his leadership, the state’s coastal permitting system was reformed, providing for efficient permitting while increasing drilling rig counts in Louisiana by more than 150 percent during his tenure. Angelle has also served as Chairman of the Louisiana State Mineral Board, and as a member of the Louisiana State University Board of Supervisors, Southern States Energy Board, and the Louisiana Coastal Port Advisory Authority.

Industry body National Ocean Industries Association (NOIA) President Randall Luthi applauded the selection.  “Angelle’s unique combination of political acumen, experience and knowledge of the offshore industry make him an excellent choice to lead BSEE.  We appreciate Angelle’s work with the Gulf Economic Survival Team, which NOIA supports, and we look forward to working with him again in his new capacity as BSEE Director. Angelle’s previous work related to natural resources and offshore safety will serve both the offshore industry and American consumers well.”