The Nautical Institute has published a new edition of its acclaimed Polar Ship Operations – A Practical Guide, by Captain Duke Snider FNI. As a highly-qualified ice navigator, Snider brings the full benefit of his extensive experience in polar shipping to describe the human, technical, environmental and operational challenges of transiting polar seas.

The book starts with a discussion of the polar environment, geography and infrastructure. Then comes a chapter on ice.

Within the marine environment there are three types of ice: fresh water ice from rivers and lakes, sea ice and glacial ice, writes Snider. Fresh water ice forms and melts each year and never grows thicker than 70 centimeters (28 inches), although rafting and ridging may occur. Sea ice forms from the freezing of sea water and contains salt or brine. In polar areas, it can survive through the summer and continue to grow the following winter. Sea ice can easily exceed three meters in thickness after successive years of growth. Glacial ice of land origin enters the marine environment as icebergs calved off glaciers at the land/sea interface and can be many tens of meters thick. 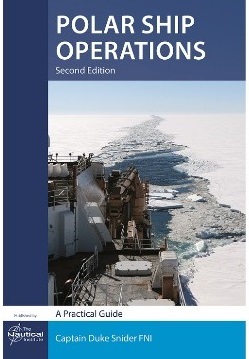 What sets the polar regions apart from other ice regions such as the Baltic Sea and the Gulf of St Lawrence is the greater presence of multi-year ice and glacial ice.

Old ice can often look very similar to first-year ice. Some of the indicators of old ice are that it has an appearance similar to hills and valleys and the color of exposed ice is often blue. Floes are also usually more rounded than first and second year ice.

Large areas of mobile ice are known as pack ice. Linear openings in ice are called leads. They form and close as the pack ice is set in motion by wind, currents or tides. Polynyas are non-linear openings. Some form each year in the same geographic area as a result of winds or currents - for example the North Water polynya in northeastern Baffin Bay.

Snider describes ice in depth including nomenclature and ice charts. He goes on to describe preparations for cold weather, ice operations, passage planning, shiphandling, emergency and environmental response and insurance and the Polar Code.

Over the past 40 years, Snider has amassed a broad range of seagoing experience in naval, commercial and Canadian Coast Guard shipping, much of it in the ice-covered waters of the Arctic, Gulf of St Lawrence, the Baltic and the Antarctic. He has served as an ice navigator in the Canadian, U.S. and eastern Russian Arctic and is CEO and Principal Consultant at Martech Polar Consulting.

Snider was instrumental in developing The Nautical Institute’s Ice Navigator Scheme, which sets the first international standards for skills, knowledge and competence for ice navigators. He was elected a Fellow of The Nautical Institute in recognition of his long seagoing career and dedication to improving standards at sea, with particular emphasis on ice navigation, and is currently the Institute’s President.