On Sunday, two American astronauts splashed down safely and successfully in the Gulf of Mexico, marking NASA's first manned spacecraft reentry with a waterborne landing since the end of the Apollo program in 1975.

However, instead of piloting a NASA spacecraft, astronauts Bob Behnken and Doug Hurley returned to earth aboard a chartered capsule owned by commercial spaceflight company SpaceX. Rather than a U.S. Navy vessel like those used during the Apollo program, the SpaceX-chartered OSV Go Navigator came to the scene to bring Behnken and Hurley to shore.

The recovery evolution proceeded smoothly and efficiently. Dragon has a water ballast system to keep the capsule upright when afloat, according to SpaceX, and it functioned as designed to maintain orientation. Before closing in and recovering the capsule, small boat crews conducted a chemical "sniffer" test to make sure that no toxic propellant fumes were present around the exterior. Testing came out negative, and a rigging team boarded the top of the capsule to prepare it for hoisting.

About 30 minutes after it landed in the water, the Dragon capsule was rigged up, and the crew of Go Navigator used an A-frame to lift it - complete with its occupants - on board the ship. The vessel got under way within minutes, bound for Naval Air Station Pensacola.

The last NASA manned splashdown occurred on July 24, 1975, when American austronauts Thomas Stafford, Vance Brand and Donald Slayton made a landing in the Central Pacific. It was the last flight of an Apollo module (though not a numbered Apollo mission). The flight centered on docking with a Soviet Soyuz capsule in orbit, and it was a rare symbol of cooperation between the USSR and the United States at the height of the Cold War. The returning astronauts were picked up by the amphib USS New Orleans (since decommissioned). 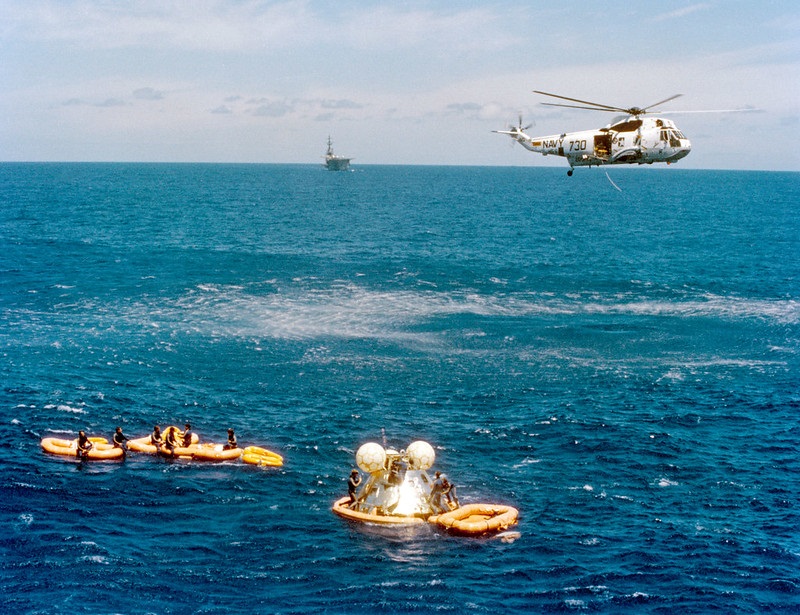 The capsule Apollo CSM-111 after splashdown in the Central Pacific, 1975 (USN)

The SpaceX mission also marks the first time that NASA has conducted manned spaceflight from U.S. soil since 2011, when the Space Shuttle program came to an end. Now that the Dragon module is fully certified for manned missions, the U.S. will no longer have to rely on Russian Soyuz rocket launches to carry its astronauts to the International Space Station.