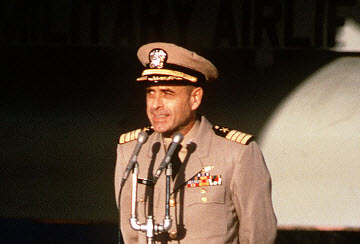 In 1947, Denton graduated from the U.S. Naval Academy and served as a test pilot, flight instructor and squadron leader, and developed operational tactics still in use, such as the Haystack Concept, which calls for the dispersing of carrier fleets to make it more difficult for the enemy to find the fleets on radar.

On July 18, 1965, Denton was shot down over North Vietnam and spent nearly eight years as a POW, almost half in isolation. During an interview with a Japanese media outlet, Denton used Morse code to blink “torture,” confirming that American POWs were being tortured. He suffered severe harassment, intimidation and ruthless treatment, yet he refused to provide military information or be used by the enemy for propaganda purposes.

In recognition of his extraordinary heroism while a prisoner-of-war, he was awarded the Navy Cross.  Denton was released from captivity in 1973, retired from the Navy in 1977 and in 1980 was elected to the U.S. Senate where he represented Alabama. 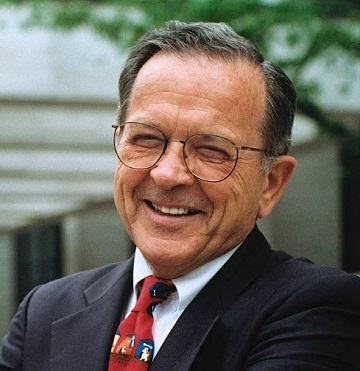 Spencer also announced the name of a another Arleigh Burke-class guided-missile destroyer - this time honoring Senator Ted Stevens, who represented Alaska from 1968 to 2009.

Stevens served as a pilot in the Army Air Corps from 1943 to 1946 and was awarded the Distinguished Flying Cross before being discharged in 1946. Stevens was elected as a state representative in Alaska in 1964, re-elected in 1966, and in 1968 he was appointed to fill a vacancy in the U.S. Senate. In 1970, Stevens was elected to the seat in a special election and was subsequently re-elected five times. He left office in 2009 as the then-longest serving Republican U.S. Senator in history.

Arleigh Burke-class destroyers conduct a variety of operations from peacetime presence and crisis response to sea control and power projection. The new vessels will be capable of fighting air, surface and subsurface battles simultaneously, and will contain a combination of offensive and defensive weapon systems designed to support maritime warfare, including integrated air and missile defense and vertical launch capabilities.

The ships, to be built at Huntington Ingalls Industries, will be 509 feet long, have a beam length of 59 feet and be capable of operating at speeds in excess of 30 knots.