Construction is nearing completion in China on a 14,280 TEU containership which will become MSC’s first ultra-large container vessel as the shipping giant, which recently became the world’s largest container line, moves quickly to adopt LNG-fuel for its next generation of containerships. The 150,000 dwt containership, operating under the shipyard’s name of Xinfu 90, reportedly achieves several milestones for LNG vessels.

Launched last November at the Yangzijiang Shipyard, Jiangsu, China, the vessel returned to the shipyard on March 3 after a week of sea trials. She will be officially renamed MSC Washington (the name is already on the bow) on her delivery scheduled in the coming weeks. The vessel, which is 1,099 feet long and 167 feet wide, will be owned by Greathorse Shipping, a subsidiary of Tiger Group, and chartered to MSC to begin service in April. She will be followed by a sister ship as part of MSC’s expansion of its fleet using LNG dual-fuel vessels.

Among the achievements for the sister ships, they reportedly will have the world’s largest C-type LNG fuel tanks with a capacity of 12,300 cbm. They will also become the first Neopanamax container vessels using this type of tank.

The tank was designed by C-LNG of Singapore, which says that previously most of the ultra-large dual-fuel LNG containerships are fitted with either a membrane tank or B-type tank. “Most of the containership operators assumed the round shape of the C-type tank would reduce some TEU spaces,” explains C-LNG. They point out the cost advantages and operational benefits of C-type tanks.

“With proper design and collaboration between fuel gas supply system (FGSS) designer and ship designer, the C-type tank is suitable for large container vessels,” said Yang Jiansong, Technical Director of Tiger Gas, the owner of the ship commenting after the sea trials. “A FGSS system based on C-type tank is the most reliable, operation friendly, and cost-saving solution.” 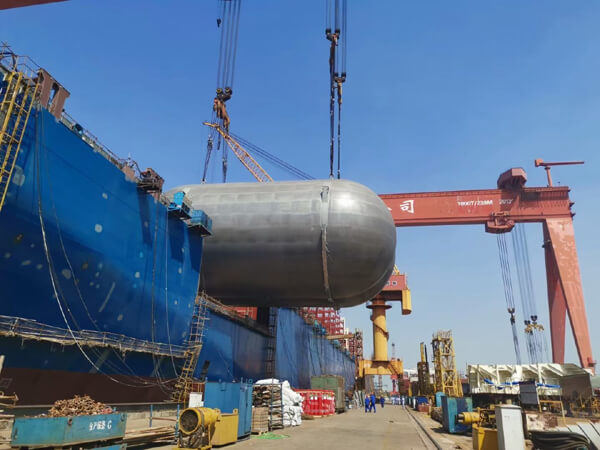 C-LNG is also highlighting that the system was delivered 11 months after contract signing working in close collaboration with sub-vendors including Kongsberg which developed the control system. Further, they also established a new record for the speed of commissioning compared to similar projects. The project included 28 days of pre-commissioning after equipment installation, 14 days of at berth for loading the initial LNG (including tank cool down, 2300cbm LNG bunkering, gas equipment testing), and seven days of sea trials.

Analysts believe the MSC Washington will be the first of approximately 30 LNG dual-fuel containerships being built that are linked to MSC. In addition to the sister ship, MSC has been linked to orders for 13 16,000 TEU LNG-fueled containerships being built by China Shipbuilding at its Dalian Shipbuilding and Guangzhou Shipyard International as well as 11 to be chartered from Eastern Pacific Shipping each with a capacity of 15,300 TEU.