MSC Boxship Being Towed After Breaking Down off Canada

The Canadian Coast Guard is reporting that a drifting MSC container ship, the MSC Kim (53,436 dwt), has successfully been taken in tow and is heading toward Nova Scotia after having blacked out in the Gulf of Saint Lawrence. The Coast Guard has been monitoring the situation with overflights and is available to provide assistance to the disabled boxship.

The 14-year-old MSC Kim was inbound to Canada when she reportedly lost power. The 869-foot vessel with a carrying capacity of 4,254 TEU departed the Mediterranean in mid-February after stops in Portugal, Italy, and Spain. It made a port call in Halifax on March 5, departing that evening for Montreal. It is unclear when the vessel first lost power although its AIS signal indicates that the vessel stopped on March 6.

The Canadian Coast Guard overflew the vessel on March 9 indicating that it was approximately 50 nautical miles off Port au Port, Newfoundland, and drifting. Contact with MSC confirmed that the vessel was disabled and that the shipping line was hiring a private rescue ship, the 2,500 dwt Atlantic Kingfisher, to tow the disabled boxship. 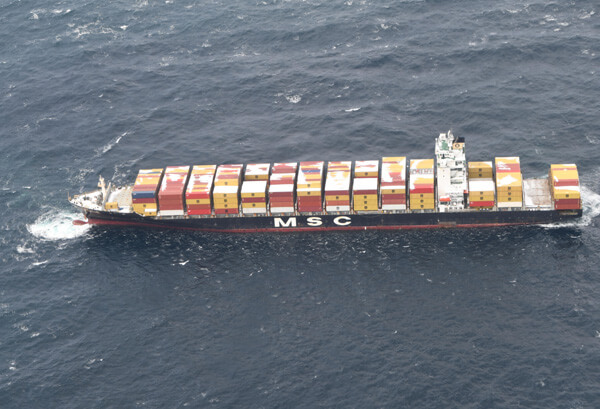 The Coast Guard’s heavy icebreaker, CCGS Terry Fox, which is stationed in the Atlantic region, was also put on alert and summoned to complete a “harbor breakout,” clearing ice at the port of Stephenville, Newfoundland, to aid the Atlantic Kingfisher in clearing the harbor to proceed to the MSC Kim. The icebreaker also traveled to the containership and is remaining in the area monitoring and available to provide further assistance.

The Atlantic Kingfisher cleared the harbor around midnight and proceeded to arrive at the MSC Kim overnight, while the Halifax Shipping News was reporting the container ship was continuing to drift in the wind traveling an additional seven nautical miles. However, it remained nearly 30 miles from the nearest shore according to the Halifax Shipping News.

The towline was attached to the vessel around 8:15 a.m. local time this morning. The tow is proceeding toward Sydney, Nova Scotia at approximately 9 knots. The CCSG Terry Fox is continuing to escort the tow while the Coast Guard reports that its environmental unit working with MSC has developed a response plan for the vessel.