A record 98,000 New Zealanders sailed on a cruise holiday in 2017, an 8.7 percent leap in passenger numbers as the country continues to rank as one of the world’s fastest growing cruise markets.

According to Cruise Lines International Association (CLIA) Australasia’s 2017 New Zealand Source Market Report, New Zealand continues to outperform many other more established cruise markets, in percentage terms and is well ahead of the U.S., Europe, and the U.K. and Ireland.

Over the past 10 years, New Zealand ocean cruise passenger numbers have risen by an average of 14.7 percent a year, with two thirds choosing to cruise close to home. 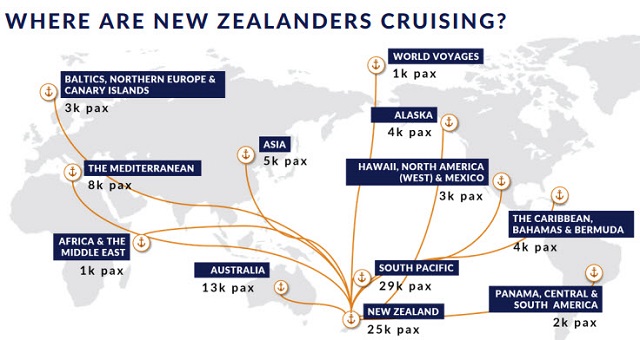 Other key findings of the report include:

• The South Pacific maintained its place as the most popular destination for Kiwi cruisers with the region attracting one in almost three of the nation’s ocean cruise passengers
• New Zealand cruises continued to be the second most popular with 24 percent of Kiwis choosing to cruise close to home
• The number of New Zealanders cruising in Australia experienced the largest growth in 2017 – with 13,264 cruising, up 112 percent from 2016
• The equivalent of 2.2 percent of New Zealand’s population took an ocean cruise last year
• The most popular cruise duration was eight to 14 days, with 44 percent of cruisers, though shorter voyages of less than four days once again saw the biggest jump of 150 percent
• Age brackets remained consistent with 2016, with around 40 percent of New Zealand cruisers under the age of 50, and about 60 percent aged over 50. The average passenger age was 51 (see table below). 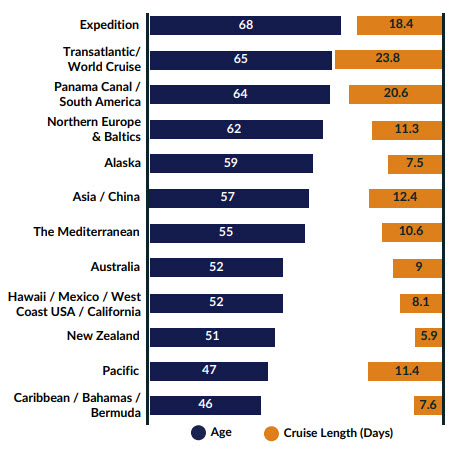