After months of a continuous backlog of containerships waiting for berth space, the Port of Savannah is projecting that moderating demand will finally permit the port to clear the congestion before the end of 2022. Contributing to the congestion was a nearly 10 percent growth in container volumes over the past three months driven by the strong demand while hundreds of thousands of more containers remained stranded for days offshore.

Lynch said the average vessel exchange grew from 3,500 TEUs per ship this time last year, to 4,500 TEUs across the past three months. The Port of Savannah handled 776,067 TEUs of loaded and empty exports between July and September, while import trade totaled 766,525 TEUs. Loaded containers represented 70 percent of the total container trade.

During the three months, the Georgia Ports Authority handled a total of more than 1.5 million TEU. That represented an increase of 135,000 TEUs, or 9.6 percent over the same period last year. They further highlighted that the increase was achieved despite a nearly three-day suspension of vessel service related to Hurricane Ian in September and the broader impact on September volumes at the Port of Savannah due to the storm.

“While we have seen powerful growth across the first quarter, we are beginning to see signs of correction in the market,” Lynch said, noting that September container volumes were off by 7.6 percent compared to the same month last year, at 436,279 TEUs.

Analysts attributed some of the surge in volumes along the U.S. East Coast starting in July due to the ongoing labor negotiations for the West Coast ports. Carriers and shippers were believed to be diverting volumes to avoid potential disruptions. Previously they had begun sending containers to East Coast and other ports to route around the congestion that had developed primarily at the San Pedro Bay ports in California.

The backlog that developed at Savannah was the second time in two years that the port experienced major delays. One year ago, on October 13, 2021, 23 ships were waiting outside Savannah prompting both CMA CGM and Hapag-Lloyd to announce they would be removing Savannah from their routes substituting Charleston and Jacksonville due to the waiting time. Highlighting a $540 million investment, the Georgia Ports Authority reported by the spring of 2022 that the backlog had been clearer. 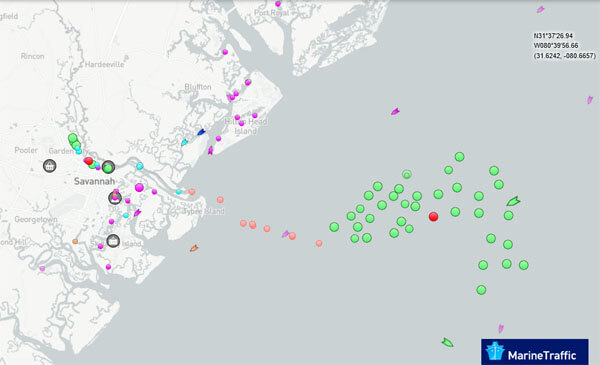 October 13, 2022, Savannah is again in the midst of a prolonged backlog. AIS data shows approximately 35 ships waiting on a daily basis off the port. Approximately 204,600 containers are on the water headed for Savannah, down from a high of 262,500 in July.

GPA Board Chairman Joel Wooten comments that the Authority’s outlook for the rest of the calendar year forecasts strong but moderating growth compared to the rate of growth experienced over the past two years.

“We’re expecting a gradual easing in demand based on several factors, including a shift in the balance of consumer spending away from goods and back to services, and the impact of inflation on the economy,” Wooten said. “After having increased trade at a compound annual growth rate of 14 percent over the past two fiscal years, this change will represent a return to a more typical rate of growth for GPA.”

The GPA says that an easing of demand should help U.S. ports address vessel backlogs brought on by unprecedented import volumes. Lynch says the Port of Savannah expects to clear the need for vessels to wait at anchor by the end of November.