Faced with persistent delays at the port of Savannah, two of the largest container shipping lines announced plans to suspend calls to the U.S.’s fourth busiest port. With Savannah handling nearly 500,000 TEU per month and a record 5.3 million TEU in FY21, delays have been building creating possibly currently the largest backlog for any port in the United States.

“In our continuous efforts to optimize our service portfolio, stabilize schedules, and adapt to market needs, we will adjust the AL3 service by temporarily removing the port of Savannah, U.S. from its rotation,” Hapag-Lloyd writes in a new alert to customers. The carrier will begin substituting Jacksonville, Florida in mid-November to the route that includes Hamburg, Antwerp, and London.

At the same time, CMA CGM also announced to customers plans to replace Savannah with calls at Charleston, South Carolina also beginning in mid-November. The French carrier tells customers in its service update, that it “will temporarily stop calling Savannah due to severe congestion in this port (8-10 days) and in order to protect schedule integrity & weekly sailing frequency.” The change comes for a route sailing between the Mediterranean and the East Coast of the United States.

Savannah officials have cited the surge in imports creating the current delays at the port. In a September interview with The Wall Street Journal, Griff Lynch, executive director of the Georgia Ports Authority, said "We have seen this transition from just-in-time in supply chains to just-in-case, and that is significantly changing our environment. Because of all this extra freight being imported, it's creating a backlog from the ship side to the dock side to warehouses and across the whole supply chain." 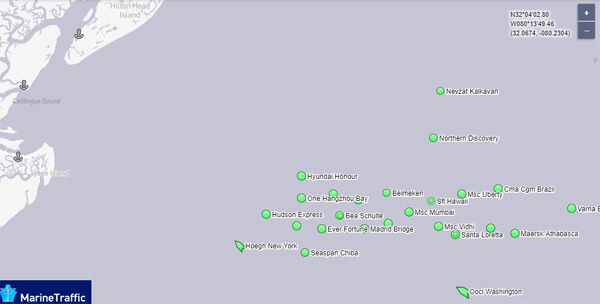 According to AIS data, there are currently 23 ships waiting at anchor off Savannah. August was the second busiest month in the port’s history with container volumes up 10 percent over 2020. In an effort to ease the mounting congestion, the Georgia Ports Authority Board two weeks ago approved more than $34 million to help expedite an additional 1.6 million TEU capacity that will begin coming online in December. Part of the approved expenditures includes the purchase of 22.2 acres along with funds to begin developing another 18 acres of land. By 2023, the port expects to add 230 acres of container handling space.

In the meantime, the Jacksonville Port Authority (JAXPORT) is highlighting that it has no container vessels waiting at anchorage and offers shippers two-way river traffic to transit to and from berths. JAXPORT also has major infrastructure investments underway to provide for continued growth, including more than $200 million in berth and terminal enhancements and a federal project to deepen the Jacksonville shipping channel which is scheduled to be completed in 2022.

Charleston recently added a second container terminal to help it accommodate future growth. Port officials said that retail imports helped to drive record container volumes at its two terminals. Volume was up five percent in September over the prior year with a total of more than 205,000 TEU. So far in the fiscal year volume is up 18 percent.

Increasingly, carriers plagued by delays and schedule disruptions are seeking alternatives to congested ports. Maersk confirmed that it has been skipping calls at the U.K.’s busiest port instead using feeder ships from Europe to bring containers to Felixstowe, while in the U.S. the port of Oakland, California has been enjoying a resurgence including services direct from Asia to the port to avoid the congestion in Southern California.