The U.S. National Transportation Safety Board has published its investigation report into the July 2016 engine room fire on board a 1958-built Luhr Bros. towing vessel, citing the probably cause for the engine explosion as a misfiring cylinder that ignited lube oil in the engine sump.

One man was killed and another suffered severe burns when the engine oversped then exploded. At the time, the uninspected towing vessel The Admiral was moored alongside barges in the La Quinta Channel, near Ingleside in Texas. 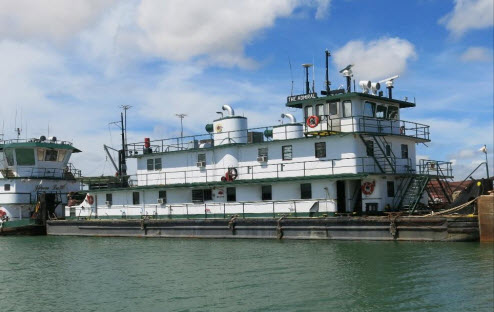 The chief engineer who was on vacation at the time of the accident was interviewed about two months later. He had worked in the industry for 32 years, the entire time with Luhr Bros., and had nine years’ experience as an engineer aboard The Admiral. He described his job duties as “to see that the motor’s serviced, the engines are serviced and ready to work, and periodic checks every watch.” A typical watch was described as a visual walk-through, checking the engines, generators and fluids about every two hours. The rest of the time on watch was spent cleaning or painting.

The second engineer was interviewed about four months after the accident, after spending several weeks in hospital. He had worked for Luhr Bros. since 1999 and had worked aboard The Admiral for about four years. During those four years, The Admiral was operational for the first six months of his employment and then laid up in drydock for about 3.5 years until it was contracted for the Ingleside job. The second engineer described his duties as monitoring the engines and oil levels, taking on fuel and cooking. He stated that he had not received any formal training on maintenance or operation of the engines; other crewmembers had shown him how to start and stop them, as well as how to check the oil levels.

Neither of the engineers interviewed had any formal training. They did not have any Coast Guard-issued credentials, nor were they required to have them. Crewmembers stated that they attended drills and tested the general alarm, fire pump and fuel shutoff valves weekly.

The vessel’s engines were 12-cylinder, 1,200-horsepower, 2-cycle diesel engines manufactured by the Electro-Motive Division of General Motors Corporation. To modernize the engines and reduce the inventory of spare parts, the engines were converted from 567C to 645E engines in 2003. According to the service record, the overhaul consisted of installing new power packs, blowers, counterweights, main bearings, oil pumps and a water pump. This was the last time the engines were overhauled. After the 2003 conversion, the hour meters were zeroed. On the day of the accident, the starboard engine had 39,608 hours on the hour meter, yet there was no record of overhaul since 2003.

Post-accident inspection of the damaged engine by the port engineer revealed that the number seven fuel injector was stuck in the full-open position, and the fuel rack arm was in the off position. Despite attempts to shut off the fuel supply to the engine, the engine accelerated in an uncontrolled manner, indicating that an external fuel supply outside its normal diesel injection system was present.

After the accident, the company hired a forensic engineer to determine the cause of the engine explosion. He concluded that the engine had been in a runaway condition and likely used its own lubricating oil as an uncontrolled fuel source for combustion. The white smoke that the pilot saw was an indicator of lubricating oil combustion. The engineer’s report concluded that a misfiring cylinder, with pressurized exhaust gases and combustion products entering the airbox, could have caused the lubricating oil in the airbox to reach a combination of pressure and temperature necessary for an explosion to occur.