The U.S. Coast Guard has ordered merchant ships and ports in the mid-Atlantic region to prepare for the arrival of Hurricane Florence, which is expected to reach shore on Friday.

On Monday evening, the Captain of the Port for North Carolina warned of tropical storm force winds within 48 hours (condition X-Ray), and the COTP for Virginia and Maryland warned of the same possibility within 72 hours (condition Whiskey). The COTPs form Wilmington, Morehead City, Hampton Roads and Baltimore set similar warnings. Captain Kevin Carroll, the commander of Sector Hampton Roads, says that he expects to close the port area to inbound and outbound traffic by noon on Wednesday.

Under port condition Whiskey, vessels over 500 GT must submit an application to the COTP if they wish to remain in port during the storm. Without a permit, these vessels must leave port at least 24 hours before the storm's arrival.

The Coast Guard has warned residents of affected areas to stay off the water; heed all weather warnings and evacuation orders; secure their boats and belongings as best they can; remove EPIRBs from docked boats in order to avoid unnecessary "distress calls" from devices that break loose in the storm; stay clear of beaches; monitor the news of the storm's progress; and, in the event of an emergency, to call 911 or make a distress call on Channel 16 - not post a message on social media. 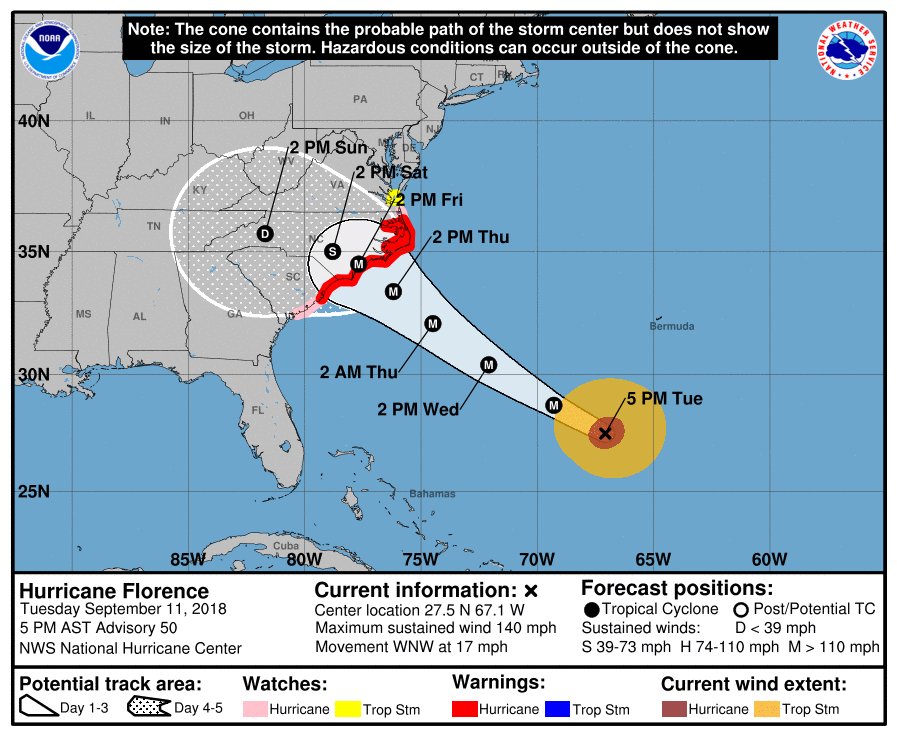 The National Hurricane Center is urging residents in affected coastline areas to "rush to completion" all efforts to protect life and property. The potentially-deadly storm surge from Florence could be as high as six to twelve feet in areas between Cape Fear and Cape Lookout, and could be between four and six feet south of Cape Fear.

In addition, the NHC is warning of "life-threatening, catastrophic flash flooding" for inland areas of the Carolinas and mid-Atlantic states. Florence is expected to slow down as it moves westward from the coast, dumping more than five inches of rain over a wide swath of the mid-Atlantic region. Hurricane Harvey exhibited a similar pattern over Texas last year, leading to widespread flooding.

The world's largest naval base, Naval Station Norfolk, has ordered most of its ships to depart in advance of Hurricane Florence. In total, 30 vessels will depart the base and nearby Joint Expeditionary Base Little Creek, and will weather the storm at sea. The departures began on Monday. Some Norfolk-based vessels will not get underway because they are undergoing maintenance, and their crews will take extra precautions to ensure their safety, like doubling up their mooring lines and disconnecting shore power cables.