Chevron and Total have sanctioned the Anchor project in the U.S. Gulf of Mexico. The move coinciding with the U.S. Energy Information Administration's announcement that the U.S. has set new records for proved reserves of oil and natural gas, as well as for production in 2018.

The Anchor project is the industry’s first deepwater high-pressure development to achieve a final investment decision. Delivery of the new technology, which is capable of handling pressures of 20,000 psi, also enables access to other high-pressure resource opportunities across the Gulf of Mexico.

Chevron has stated its commitment to deepwater assets and anticipates delivering stand-alone development projects and sub-sea tie backs at a competitive cost. For new projects in the Gulf of Mexico, the company has reduced development costs by nearly a third, compared to its last generation of greenfield deepwater investments by by standardizing equipment, utilizing fit-for-purpose surface facilities that require less capital and employing drill to fill strategies.

The Anchor Field is located in the Green Canyon area, approximately 140 miles (225 kilometers) off the coast of Louisiana, in water depths of approximately 5,000 feet (1,524 meters). The initial development of the project will require an investment of approximately $5.7 billion. Stage 1 of the Anchor development consists of a seven-well subsea development and semi-submersible floating production unit. First oil is anticipated in 2024.

The planned facility has a design capacity of 75,000 barrels of crude oil and 28 million cubic feet of natural gas per day. The total potentially recoverable oil-equivalent resources for Anchor are estimated to exceed 440 million barrels. Chevron, through its subsidiary Chevron U.S.A. Inc., is operator and holds a 62.86 percent working interest in the Anchor project. Co-owner Total E&P USA, Inc. holds 37.14 percent working interest. 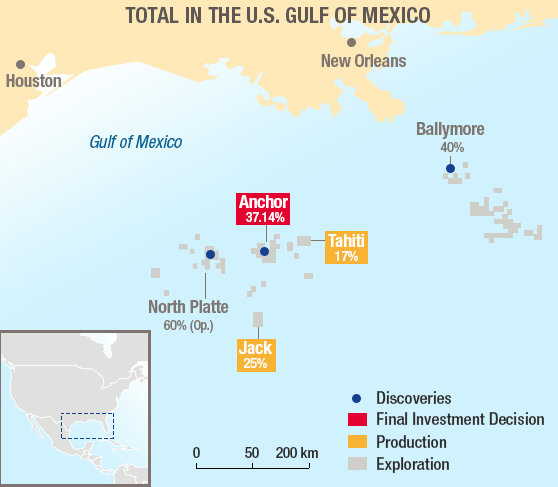 Total has also announced that front-end engineering and design (FEED) has begun for the North Platte discovery in the deepwater U.S. Gulf of Mexico. Like Anchor, North Platte requires the use of 20 kpsi technologies. The field development plan is based on eight subsea wells and two subsea drilling bases connected via two production loops to a newbuild, lightweight floating production unit (FPU). Production will be exported through existing oil and gas subsea networks.

Total operates North Platte with a 60 percent working interest, alongside Equinor (40 percent). Oil production at plateau level is expected to average 75,000 barrels per day. Output will include associated gas. Total also holds interests in high-potential exploration acreage in the Greater North Platte Area, and the FPU design provides for a possible future tie-in.

The North Platte project marks Total’s return to the region as an operator, and final investment decision is expected in 2021.

The EIA estimates that the U.S. had 47,053 million barrels of crude oil and lease condensate proved reserves as of December 31, 2018. Proved reserves rose 12 percent (4.1 billion barrels) onshore in the Lower 48 states, 20 percent in Alaska and 10 percent in the Federal Offshore (both Pacific and the Gulf of Mexico).