A solo skipper on the Route du Rhum - Destination Guadeloupe ocean race survived flooding, an explosion and a sinking over the weekend, and he was rescued unharmed by a Maersk boxship.

On Monday, yachtsman Fabrice Amedeo, 42, was under way en route to the port of Cascais, Portugal to seek refuge. On Saturday his IMOCA-class yacht had sustained a serious leak, flooding the battery compartment and disabling the electrical system. With water on board and no electronics or autopilot, he decided reluctantly to step out of the race.

At about 1140 hours on Sunday, something on board began to smoke heavily. Amedeo suited up in his survival suit and grabbed a fire extinguisher. Luckily the smoke subsided, and he decided to carry on to seek a port of refuge.

At 1230 on Monday, the smoke started up again, and then something exploded. Amedeo said that he grabbed what he needed, alerted his shore team with a quick call and prepared to abandon ship. As he was getting to jump over the side, flames burst out of the cabin. He managed to board his liferaft, and within half an hour, he watched the yacht go under.

Amedeo activated his EPIRB, and the race managers initiated rescue operations in consultation with Portuguese SAR authorities. Meanwhile, Amedeo - who had grabbed his handheld VHF radio before abandoning ship - began to make distress calls every half an hour. Within a few hours' time, he was answered by the boxship Maersk Brani (misidentified in a communique as "Maersk Brida"). The  six nm away but could not see him visually because of the heavy swell. "I'm in constant contact on the VHF with the captain, who can't see me: the sea is big and the sun is on the water and I'm a tiny orange dot," he recounted.

After some maneuvering, the captain of Maersk Brani got upwind of the small raft and drifted down to it, creating a lee. The crew passed down a line, and in heaving seas, Amedea jumped to a ladder and climbed aboard.

"All my dreams were went down with my boat," lamented Amedeo in a statement. "I'm devastated but the happiest of men [for surviving]."

Maersk Brani planned to deliver Amedea to the port of Ponta Delgada in the Azores, according to the race managers. AIS data shows that the vessel called at the port briefly on Tuesday before continuing on her commercial voyage.

Amedeo's ordeal was not the only race casualty this week. On Monday night, off the coast of Galicia, a trimaran from the Rhoute du Rhum's multihull class lost power in rough weather and ran in to difficulty maneuvering by sail alone. The vessel requested assistance, and Spain's Salvamento Maritimo dispatched a surf rescue boat to attempt to tow the yacht. The effort was not successful, despite repeated attempts, and the trimaran went aground on a beach near Corrubedo, Galicia. A rescue helicopter safely rescued the sole yachtsman aboard and delivered him to Alvedro. 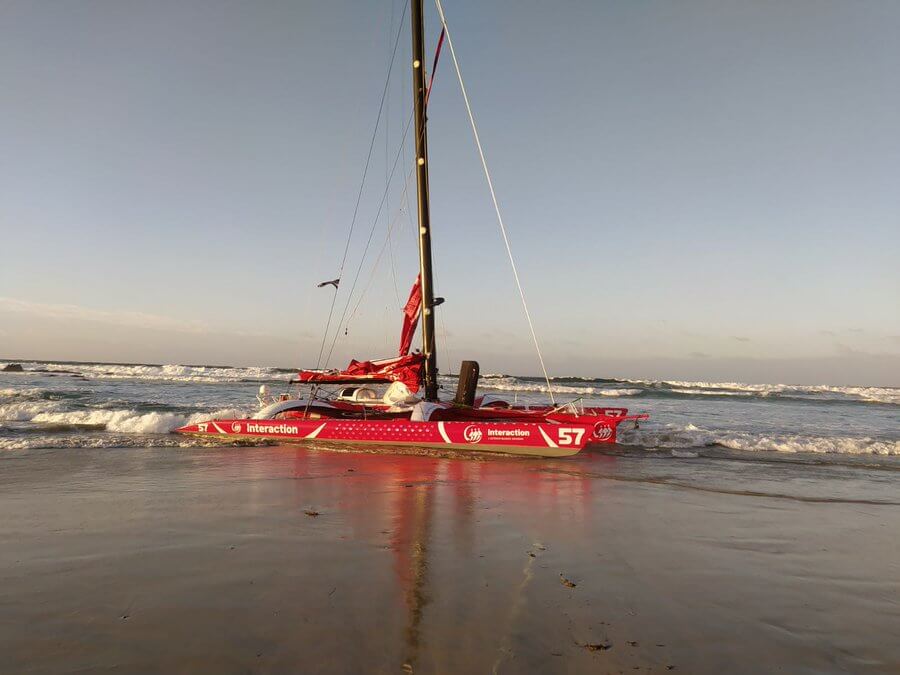 The Route du Rhum-Destination Guadeloupe is a solo transatlantic race from Saint-Malo, Brittany to Guadeloupe, a distance of more than 3,500 nm. It is a proudly French event, held every four years for competitive professional and amateur sailors in six vessel categories.