Three containers from the boxship Zim Kingston have drifted ashore near Cape Scott Provincial Park, a remote wilderness area on the northwestern tip of Vancouver Island.

According to local CHEK News, response officials confirmed Wednesday that three boxes and "additional debris" had floated onto the shores of the pristine coastal park. A Canadian Coast Guard helicopter has deployed to the scene to investigate the containers and find out the contents.

The Zim Kingston encountered heavy swells and sustained severe rolling off the entrance to the Strait of Juan de Fuca last Friday. At the time, her crew estimated that she lost 40 containers over the side due to extreme motion. On Wednesday, officials updated the loss estimate to 109 boxes (including containers that have since sunk or grounded). One damaged container stack caught fire and burned after the the cargo loss incident, delaying an accurate estimate of how many boxes had gone missing.

"There have been some discrepancies in the number - 106, 109; various reports. Right now, our best count is 109. This is still an ongoing challenge, of course, and it could change,” deputy federal incident commander Mariah McCooey told CHEK News. 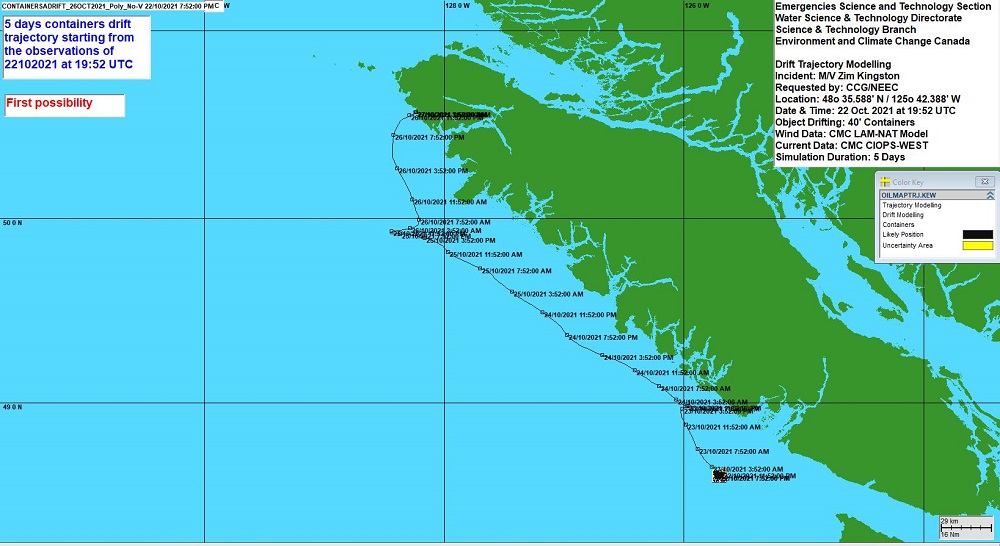 The floating containers have been drifting northwest, parallel to the west coast of Vancouver Island. The shipowner has contracted with a salvage company to attempt to recover floating boxes when weather and surface conditions allow; persistent heavy swells have interfered with the operation so far. The U.S. Coast Guard is encouraging mariners to keep a sharp eye for loose containers off the island's Pacific coast and to report them to the Canadian Coast Guard.

Officials have asked the public not to open any containers or take the contents if boxes are found on shore.