Japan's whaling fleet has returned home from the Southern Ocean after a successful 143-day investigation “without being interfered with by the anti-whaling group.” 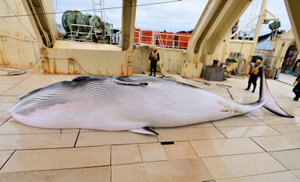 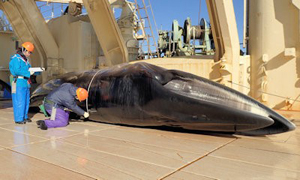 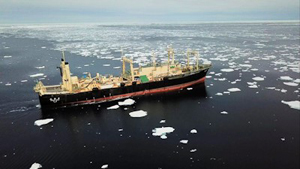 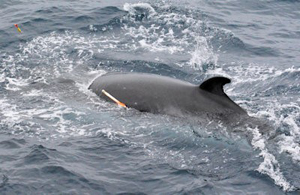 Whales from the 2017/18 investigation Credit: Japanese Institute of Cetacean Research

Of the 333 whales killed, 152 were males and 181 were females. A preliminary analysis of pregnancy rate suggests healthy fertility rates, says the Japanese Institute of Cetacean Research. The animals' earwax plugs and eye lens were used to determine age, blubber was used to determine nutritional status, gonads were used to obtain breeding information and digestive system contents used to examine prey species.

The anti-whaling group Sea Shepherd has opposed Japanese whaling in the Southern Ocean Whale Sanctuary every year from 2005 to 2017 except for the 2014/2015 season when the whalers did not return to Antarctic waters. Sea Shepherd sent two ships down to the Southern Ocean last year (2016/2017), and although they got close, they could not close in because of advanced military satellite technology that allowed the whalers to see Sea Shepherd's movements in real time.

The organization did not return for the 2017/2018 whaling operation “because it would be like taking a slingshot to a gunfight in pursuit of whalers who can see us but we can’t see them - in other words, a fruitless waste of time and resources,” said founder Paul Watson.

“Our 12 years of opposition had helped to force the kill quotas down from 1,035 to 333 and removed Humpbacks and Fin whales from the butcher’s table. We also contributed immensely to the Japanese whaling fleet being exposed and condemned for their illegal whaling activities and in the process severely humiliated the Japanese whalers and government. We also cost the whalers tens of millions of dollars and most importantly we saved the lives of over 6,000 whales and the lives of all the calves that have since been born to the whales we spared from the harpoons.”

Sea Shepherd Australia has voiced its disappointment at the whaling fleet's success. Managing Director Jeff Hansen stated: “The Japanese whale poachers are in contempt of the Australian Federal Court with a million dollar price tag on their heads and found to be illegal by the International Court of Justice. Their new bogus scientific whaling program does not even have the backing from the International Whaling Commission.

"Another 333 whales have been killed in Antarctic waters, while the Australian Government refuses to do anything to halt this illegal slaughter. Our Prime Minister has done nothing but 'express disappointment' over Japan's continued whaling program. The vast majority of Australians want action to end this abhorrent whale hunt, the Australian Government must not allow this to continue any longer. Legal options and the potential to send a vessel to intervene must be looked at in order to stop whaling occurring next summer.”

In November last year, Australian Greens spokesperson Senator Peter Whish-Wilson welcomed the release of the Australian Government footage exposing details of Japanese whaling methods, obtained under Freedom of Information request by Sea Shepherd, saying: “This footage lays bare the brutality that is whaling. These whales are being killed and die slowly and in pain, sometimes drowning in their own blood. This slaughter happens for no legitimate reason and should be condemned.

“The Australian Government needs to make sure that people in Japan see this so they understand the gravity of what their country does in their name. I spent time in Japan recently, meeting with politicians and activists, and what is clear to me is that the Japanese public at large are oblivious to these activities.”