As part of a fleet modernization effort, Japan’s Mitsui O.S.K. Lines confirmed the retirement of one of its oldest LNG carriers. The vessel was replaced by a newly delivered ship which has a 44 percent larger carrying capacity.

“We bid farewell to our first and the oldest LNG carrier, the Senshu Maru,” MOL wrote in a sentimental social media posting.  They noted that during its 37-year career, the LNG carrier had “sailed nearly 2,000,000 nautical miles (equal to over 92 times around the world) while completing 733 voyages and carrying 9 million tons of LNG, under MOL operation.”

Built in 1984, the Senshu Maru had begun service just a year after MOL entered the LNG ocean transport business. Built by Mitsui Ichihara Engineering & Shipbuilding in Ichihara, Japan, the 69,594 dwt gas carrier had a capacity of 125,833 m3. She completed her last voyage at the end of 2020, lingering in the Singapore anchorage while her fate was sealed. The Senshu Maru arrived at a scrapyard in Alang, India on January 18.

“We sincerely appreciated our oldest lady who completed so many operations safely and we will continue stable energy transportation as the world leader in safety,” write MOL. 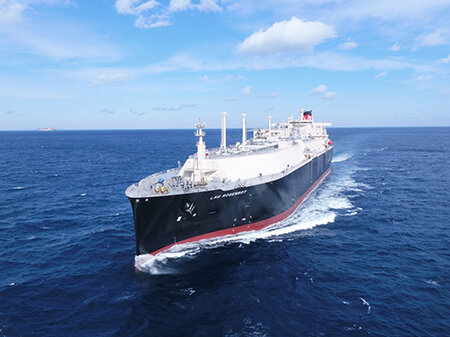 Days later, on January 25, they took delivery from the Daewoo Shipbuilding & Marine Engineering Co., of their newest LNG carrier the 99,000 dwt LNG Rosenrot which was built at the Okpo shipyard in South Korea. The new vessel is a sister ship to the LNG Schneeweisschen, which entered service in July 2018. Both are operating under charter to Uniper Global Commodities.

The LNG Rosenrot, with a carrying capacity of 180,000 m3 is not only larger than the older vessel but also more efficient. It is equipped with a slow-speed two-stroke engine (X-DF) made by Winterthur Gas & Diesel, which can run on natural gas, MGO, and Heavy Fuel Oil.