JAXPORT, Florida’s largest container port and one of the nation’s top vehicle-handling ports, celebrated the completion of the major portion of the Jacksonville Harbor Deepening Project designed to expand access and capacity for the Blount Island Marine Terminal. The project, completed with the US Army Corps of Engineers deepened 11 miles of the federal shipping channel—from the sea buoy to Blount Island—to a depth of 47 feet from its previous depth of 40 feet.

During the dedication ceremonies, port officials highlighted that the 47-foot harbor provides the channel depth needed for larger ships to call Blount Island and allows existing ships calling Jacksonville to carry more cargo on board. In addition, the project includes a new turning basin allowing larger vessels to turn around at Blount Island berths.

“When JAXPORT began this deepening journey nearly two decades ago, the goal was to build the port of the future,” said JAXPORT Board Chair Wendy Hamilton. “With today’s completion of deepening through Blount Island—the future is here, and JAXPORT is equipped to meet the needs of the nation’s supply chain for generations to come.” 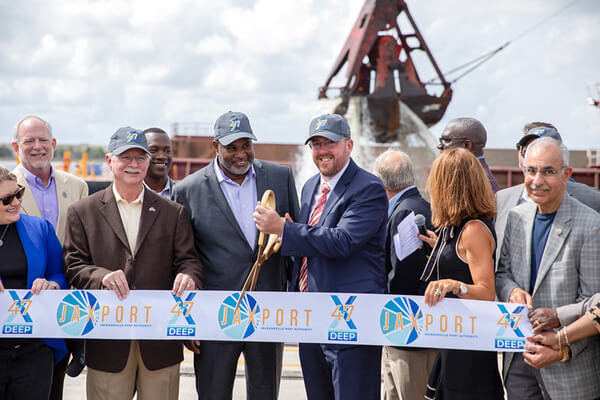 “Anchored by harbor deepening, well over half a billion dollars in infrastructure improvements have been recently completed or are currently underway to improve our container capabilities at Blount Island,” said JAXPORT CEO Eric Green. “With the support of our federal, state, and local partners, JAXPORT is open for business and ready to serve the needs of our customers while creating local jobs here in our community.”

In addition to the deepening, berth improvements, and new cranes, more than $70 million in terminal enhancements—funded by SSA and a grant from the US Maritime Administration (MARAD)— are also underway to expand container capacity at the SSA JCT. By spring of 2023, SSA will complete the first three of seven construction phases, producing approximately 31 acres of newly paved and improved operating area. The total project of approximately 93 acres will be complete by the end of 2024, allowing the SSA JCT to accommodate 500,000 TEUs annually.

The Jacksonville Harbor Deepening Project is a 13-mile federally authorized project. Deepening through Blount Island was completed three years ahead of the original project schedule. The total funding to date is $420 million funded through a public-private partnership between the federal government, State of Florida, City of Jacksonville, JAXPORT, and SSA Atlantic. The current funding model covered the completion of the first 11 miles. The final two miles are authorized and under review.