The FERRYSAFE project team formed by global trade association Interferry to study safety advances in Philippines ferry operations has completed the second of two visits to the country and is now developing best practice guidance to assist the IMO and other developing nations.

Week-long visits were made to political capital Manila in March and ferry capital Cebu in late May.  Lessons learned suggest there is no “silver bullet” solution to explain how ferry fatalities in the Philippines have gradually fallen from highest in the world over the past 50 years to being much closer to the global average during the current decade. However, industry-wide discussions consistently identified some paramount factors, notably:

The follow-up Cebu visit involved a further 22 interviews, including meetings with top national and regional officials from the maritime authority MARINA and the Cebu Port Authority. The team also visited shipyards, observed several Philippines Coast Guard pre-departure inspections and undertook seven ferry crossings on vessels of wide-ranging type, age and size. Additional insights came from a three-hour session with highly engaged members of the regional Passenger Ship Spotting Society – one of whom survived a ferry capsize in 2005.

Conceived by Interferry’s domestic safety committee, the FERRYSAFE initiative is supported by a grant from U.K. charity the Lloyd’s Register Foundation covering direct expenses, while man-hours are being contributed by the four team members.

Team leader Dr. Neil Baird is founder and chairman of Australia’s publisher Baird Maritime and last year completed a doctorate on the causes and prevention of fatal ferry accidents. Alongside him are two fellow members of the domestic safety committee – Johan Roos, Interferry regulatory affairs director, and Edwin Pang, U.K. general manager of naval architects Leadship, who chairs the Royal Institution of Naval Architects IMO committee. They were joined by writer and editorial researcher Nelson Dela Cruz, a volunteer with Philippine non-profit organization the Maritime League, acting as facilitator.

Roos said that the importance of insurance and insurance surveys was a major insight, noting: “Previously, we did not have a good grip on how the national hull and P&I markets worked - we were told by insurance experts back in Europe that the Philippines ferry market was ‘not insurable’. We have learned, however, that requirements from national insurance companies have actually been a strong driver. Our further deliberations will keep pulling on that thread.”

Looking ahead, Roos concluded: “The positive trend that led us here has been corroborated by all the stakeholders we met. We have good reason to remain hopeful for the future development of safety standards in the Philippines and for our ability to condense their success into something exportable to other countries.”

The FERRYSAFE team will draft its report to be presented at Interferry’s 44th annual conference and the Lloyd’s Register Foundation conference, both taking place in London in October. Dissemination to other developing nations, particularly in SE Asia and Africa, will follow mainly via Interferry’s ongoing participation in the ASEAN regional ferry safety forum and through its involvement with the IMO’s Safety Committee and Technical Cooperation program. 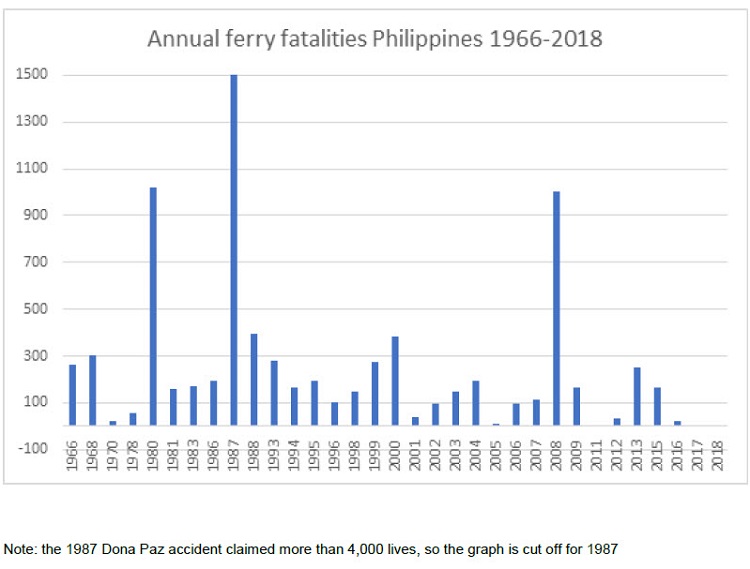 Note: The Dona Paz was a Philippine-registered passenger ferry that sank after colliding with the oil tanker Vector on December 20, 1987. Traveling from Leyte island to Manila, the vessel was overcrowded, with at least 2,000 passengers not listed on the manifest. Additionally, it was claimed that the ship did not have a radio and that the life-jackets were locked away. However, official blame was directed at Vector, which was found to be unseaworthy, and operating without a license, lookout or qualified master. With an estimated death toll of 4,386 people and only 24 survivors, it remains the deadliest peacetime maritime disaster in history.