"The Shipping Corporation of India, as a part of its ongoing Diamond Jubilee celebrations and also to commemorate the International Women’s Day on March 8, 2021, achieved another feat when Mansukh Mandaviya, Minister of State (Independent Charge) for Ports, Shipping & Waterways, virtually flagged off the 'All Women Officers’ Sailing' on MT Swarna Krishna – SCI’s product carrier from JNPT Liquid Berth Jetty on March 6, 2021," said the Ports, Shipping and Waterways Ministry.

The 73,655 dwt product tanker MT Swarna Krishna departed the Indian port of Nhava Sheva found for Vadinar on March 6. Before the sailing of the 748-foot tanker, ceremonies were held to mark the occasion. Despite the advancements made by women in the industry, the sight of an all-female crew is still a novelty.

"The move demonstrated the gradual shift in the perception of seafaring as a male-oriented profession and the principles of Diversity & Inclusion that SCI upholds. SCI has been a pioneer in employing women seafarers on board its vessels and has implemented various initiatives including age relaxations and fee concessions to aspiring female cadets through its Maritime Training Institute to promote their integration into the maritime sector," said a statement from SCI.

Last year, Celebrity Cruises reported that only two percent of the world’s mariners were women. The cruise line named its first women captain in 2015 and with a concerted effort lead by the line’s CEO and senior management, the cruise line increased diversity in its ranks to nearly 25 percent of its bridge teams being female officers.

The company’s success in increasing women officers on the bridge led to the idea of operating a cruise with an all-female bridge team, but as CEO Lisa Lutoff-Perlo recalled then someone suggested extending it to all of the senior positions.

On March 8, 2020, Celebrity Cruises sent its flagship, the Celebrity Edge, to sea with an all-female bridge and onboard leadership team. Commanding the team was Captain Kate McCue, who five years earlier became the line first female captain, and it consisted of 26 other women representing 16 different countries. In addition to the bridge, women headed up the hotel department, guest services, the hospital, safety, finance, environmental, housekeeping, and other roles. Included in the team, were the cruise line’s first female engineering officers. 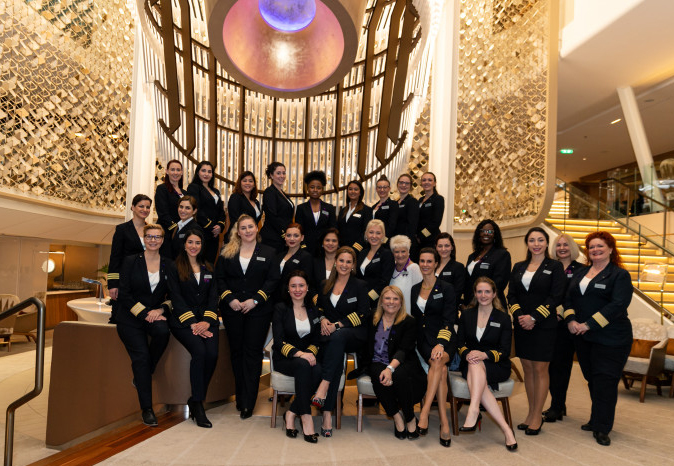