Hyundai Heavy Industries Group has developed and successfully tested Korea's first LNG/hydrogen mixed-firing engine. The development of the hybrid engine is part of the South Korean shipbuilding industry’s focus on next generation ships and high-value applications which it is pursue to expand its shipbuilding capabilities and meet the challenges for eco-friendly shipping/ 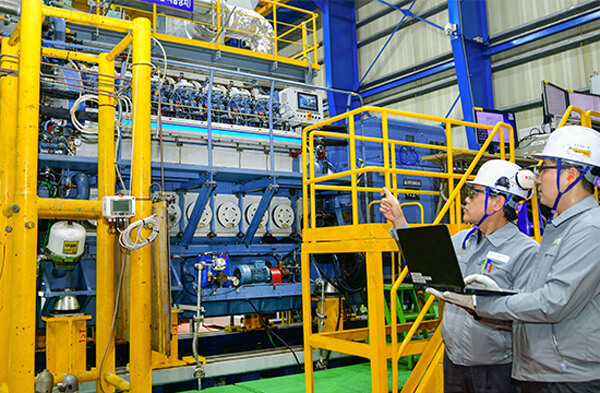 Hyundai believes that when an LNG-hydrogen hybrid engine is applied to a liquefied hydrogen carrier, the effect of ship operation will be further maximized. During operations they expect that the hydrogen lost during the voyage can be minimized by reusing the hydrogen boil-off gas (BOG) generated during the transportation process as fuel. In this regard, Hyundai Heavy Industries Group says it has also proven a hydrogen carrier system applied with the Himsen engine. They highlight that this system received certification from DNV at Gastech last September.

Hyundai plans to continue R&D on LNG/hydrogen hybrid engines in the future. Their goals is to complete the development of a hybrid engine with a higher proportion of hydrogen by 2023, and develop a complete hydrogen engine in 2025.

An official from Hyundai Heavy Industries Group noted the growing interest and need for carbon neutrality throughout the shipbuilding and marine industries which this engine is designed to address. However, they noted the scope of application of the LNG/hydrogen hybrid engine is not limited to ships. The LNG-hydrogen hybrid engine they said has a longer lifespan than hydrogen fuel cells used for small-scale land-based power generation, and has excellent load-following performance that adjusts power generation output according to changes in electrical load.

They expect the hybrid LNG/hydrogen engine will have a broad range of applications.