Hong Kong marked the first arrival of an international cruise into the city in three years signaling what many people hope is a key turning point for the industry and Asia’s recovery from the COVID-19 pandemic. While China continues to battle surges of variants of the virus, officials are still hailing the return of cruise ships and highlighting their plans to increase marketing to rebuild the batter tourist industry in Hong Kong.

The Silver Spirit arrived in Hong Kong just after sunrise on Wednesday, January 18 for a two-day port call during a cruise around Asia timed to coincide with the Lunar New Year celebrations. The 39,500 gross ton cruise ship, which is operated by Silversea Cruises, part of the Royal Caribbean Group, was repositioned by the line to operate from Asia as part of the industry’s return to the market. She will remain in the region till March when she begins her repositioning to Europe for the summer season.

Built in 2009, the cruise ship has a capacity for 600 passengers with a crew of approximately 400. She departed from Singapore on January 5 making calls in Bangkok, Thailand, and Vietnam before she arrived in Hong Kong. The current cruise ends in Singapore, but in February she will be offering a 14-day round-trip cruise from Hong Kong.

Dr. Pang Yiu-kai, Hong Kong Tourism Board Chairman, described the return of international cruises to Hong Kong as “a milestone in Hong Kong’s tourism revival.” Speaking during the welcoming ceremony for the cruise ship, he said, “I’m excited to welcome the Silver Spirit and its passengers to Hong Kong, as it not only marks the resumption of Hong Kong’s cruise tourism development and its return to the international cruise tourism market, but also enables the industry to develop a wide range of tourism products to enrich the visitor experience, further stimulating them to visit Hong Kong.”

The return of cruise ships is seen as the next step in the city’s recovery. In 2019, Hong Kong had nearly 56 million visitors but figures released by the government showed it was just over 600,000 for all of 2022 despite relaxing the total ban on international travel and at the end of the year reopening the border to China. The government said it would also increase the quota for the number of people permitted to come from China to encourage travel during the Lunar New Year celebrations. 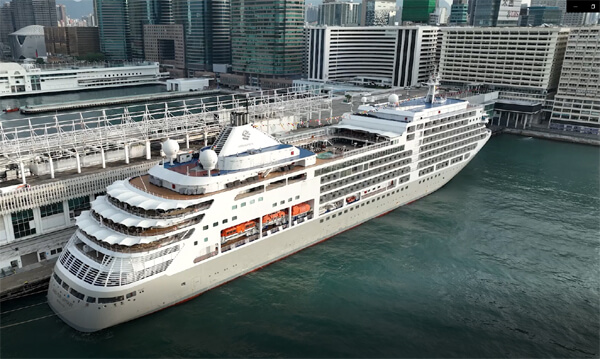 Tourism officials are highlighting that they have successfully secured cruise calls from at least 16 cruise lines for 2023, including scheduled calls by Royal Caribbean Group, Princess Cruises, Holland America Line, and MSC, as well as many of the leading operators of smaller luxury cruise ships. The first large cruise ship scheduled to return to Hong Kong is the Mein Schiff 5 (98,785 gross tons), operated by Germany’s TUI Cruises. Booked to make four calls in Hong Kong, the ship is expected to bring more than 5,000 travelers to the city. In March, Resorts World Cruises will also start cruises homeported from Hong Kong offering short cruises to nowhere.

Officials of the tourist board said they are continuing to be in contact with the cruise lines and will be launching new marketing and support programs. They provided coupons to all the passengers aboard the Silver Spirit to encourage them to visit destinations in the city and said they will continue these efforts as well as provide incentives to the cruise lines. They also look to promote the Hong Kong cruise experience to visitors from the Guangdong-Hong Kong Macao Greater Bay Area (GBA) and collaborate with other ports in the region to promote regional cruise itineraries as they seek to rebuild the industry.

China is yet to reopen its ports for the international cruise industry but the restoration of Hong Kong is seen as an important first step to rebuilding cruising in Asia. Before the pandemic, Asia was one of the most popular cruise destinations and China had been the cruise industry’s fastest-growing source market for passengers.