Hapag-Lloyd is commencing a five-year, fleet-wide upgrade program designed to make its existing vessels more efficient. The company is planning a series of steps that they said will be applied to more than 150 ships across the current fleet which numbers 253 vessels, of which approximately 120 are company-owned while the others operate under long-term charters. The fleet upgrades are in addition to the ordered newbuilds.

“We are investing in new future-proof ships while simultaneously focusing on making our existing fleet fit for the future. The Fleet Upgrade Program will boost the energy efficiency of the entire fleet,” said Dr. Maximilian Rothkopf, COO of Hapag-Lloyd. He notes that the company aims to be climate-neutral by 2045 and they have an interim target of reducing the CO2 intensity of their ships by 30 percent by 2030.

The program is kicking off with an overhaul of the 20-year-old containership Ningbo Express. The vessel, which is 1,050 feet long and 100,000 dwt will be fitted with a new propeller. The propeller, which has been optimized for energy efficiency by the German manufacturer MMG, will be installed on the 7,500 TEU Ningbo Express in Dubai in September. As a result, Hapag expects the ship’s fuel consumption, depending on the sailing condition, to be reduced by between 10 and 13 percent, producing a similar level in reduction of CO2 emissions.

Hapag reports that at least 86 ships in the fleet will be fitted with the new propeller during the upgrade program. No details were provided on how the propellers are being optimized, but they said similar fuel reductions are expected across the different classes of vessels. 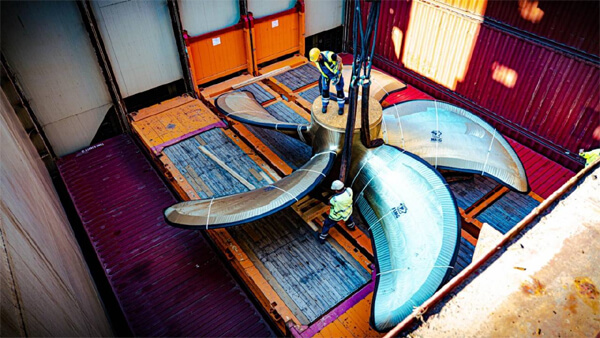 Other elements of the upgrade program focus on the bow of the vessel as well as new hull treatments. Hapag said that 36 vessels will receive a new, flow-optimized bulbous bow. Also, during scheduled dry dock stays, a resistance-reducing coat of anti-fouling paint will be applied to all vessels on the exterior hull beneath the waterline.

No cost was announced for the program, but Hapag expects that most of the measures will be carried out by 2025 and make a significant contribution to helping the company to achieve its climate targets. The upgrades to the fleet come as Hapag has also ordered 12 LNG-fueled containerships being built by Daewoo Shipbuilding & Marine Engineering (DSME) in South Korea. Hapag placed the first order for six vessels which will be among the largest containerships in the world in December 2020 and later expanded the order to 12 vessels. They will each have a capacity of approximately 23,500 TEU with deliveries expected to begin in April 2023 and continue into 2024.

Like all the carriers, Hapag is under pressure to improve the environmental performance of the fleet as new IMO regulations come into effect measuring ship’s carbon intensive. In addition, bunker prices skyrocketed in the first half of 2022. In its mid-year financial report, Hapag said the average bunker consumption price had increased 67 percent in the first half of 2022, to $700 per tonne. The rising cost of fuels contributed to the economic considerations which make the conversion program more compelling. Last year, when Hapag completed the first conversion of a larger boxship to operate on LNG, CEO Rolf Habben Jansen said the projects were cost prohibitive unless the expense could be reduced by approximately a third, and although the line had other LNG-ready vessels no further conversions were planned.